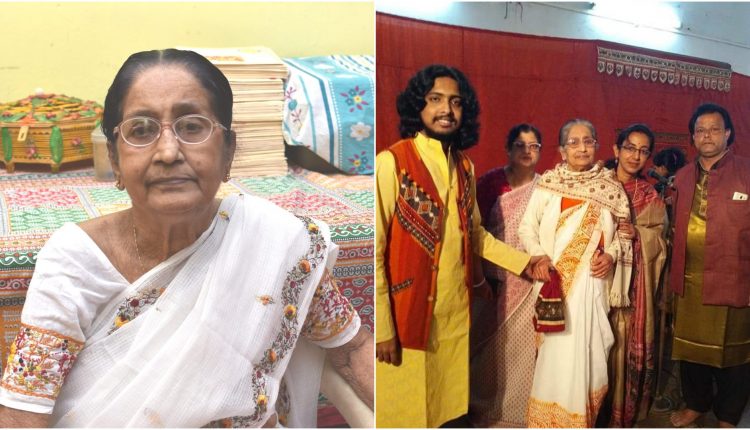 She was hailed as a living archive of the Barak Valley’s folk music, i.e, the music of the land of Srihatta. The song that united everyone in Silchar after the martyrdom of 11 men and women on May 19 of 1961, Anandamoyee Bhattacharjee was the first ever to sing that song. On Monday at 9:57 pm, at the age of 91, legendary folk singer Anandamoyee Bhattacharjee passed away at her residence on Central road. Quite recently, she suffered a waist injury in an accident in her home, for which she was hospitalised for some time and was released later.

On Monday evening, her health suddenly started deteriorating, following which after some time, she breathed her last. It was made known on behalf of her family that her funeral and cremation would be done by Monday night itself.

Late Kalika Prasad Bhattacharjee’s paternal aunt (pishi) by relation, Miss Anandamoyee spent her whole researching on music. Everyone in her family is deeply involved with music. On one hand, where she used to perform folk songs like Geet, Keertan, songs of Holi, etc. with brilliant acumen, on the other hand, she was also crafted in classical music like Rabindra Sangeet and Shastriya Sangeet as well, without compromising the uniqueness of the song. Musical stalwarts like Shantidev Ghosh have appreciated her songs and compositions. In 2003, the West Bengal government’s Department of Folk Culture released a cassette of her titled ‘Dhamail Geet’. Besides, she has also folk music of Srihatta to different parts of the country including the Jadavpur University.

Renowned teacher and writer, Samar Bijoy Chakraborty happen to be her son-in-law. He said, “To us, Anandamoyee Bhattacharjee was like a living archive of Srihatta’s folk music. She never had to jot down any of her songs, remembered every one of them and never sang on a wrong scale. Many have learned from her over the years and she too patiently taught every one of them. The sweetness of the music of this region has been delivered to different parts of the country. After listening to her, many big musicians got surprised that there could such good music coming out of our region. Her demise is certainly a great loss and with that, an important chapter has been closed. Her family members as well as many admirers mourned her death. Her last rites and cremation would be done on Monday night itself.”

One of the members of the renowned band Dohar, Sudipto Chakraborty, happens to be her grandson. He mentioned that the song on May 19 (Unishe May) ‘Daake oi Ekadosh Shaheed era Bhai’ was written and composed by Shyamapada Bhattacharjee. His younger sister Anandamoyee Bhattacharjee happened to sing for the first time in this song. The song played a key role in the cultural protest of May 22 in Silchar. She also happens to be the first student of the prestigious Silchar Sangeet Vidyalaya and has also served as the Principal of the Aamrityu Sangeet Vidyalaya. As a teacher of the Dinanath Nabakishor Girls’ School (DNNK), she was a favourite among her students as well. Hence, her death would understandably mean the fall of a big star in the musical world.