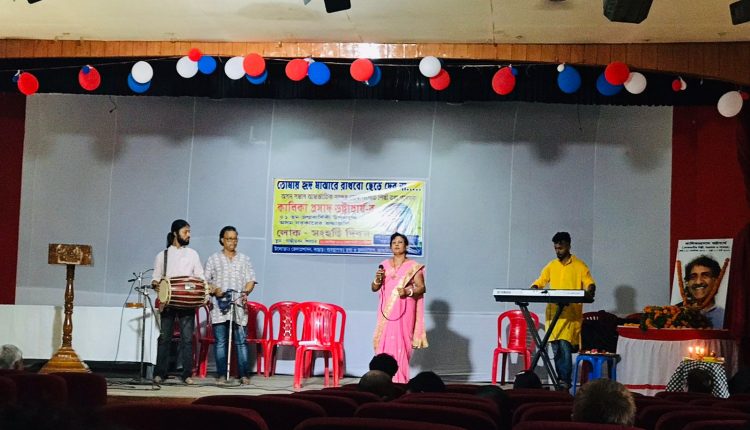 September 11, 2021, was announced to be celebrated as ‘Loko Songhoti Divos’ by the Government of Assam as a mark of respect to the birth anniversary of Folk Legend, Lt. Kalika Prasad Bhattacharjee. Accordingly the circular notified two different ways as to how the day was going to be celebrated. Firstly by playing his music via the Govt. announcement system in the morning and evening and also by physically organising a program to pay respect to the artist by various people and organisations.

Following the directive, the District Administration organised a tribute function at Gandhi Bhawan in Silchar today. Astonishingly, the event received very little or no public participation. It is worth mentioning here that the circular by the Govt. was rolled out on 9th September, leaving only two days to plan the event.

This day is being observed by the State Govt. since 2017 but this was the first year when they decided to organise a physical event at the artist’s hometown and in fact, at a location that is very close to his ancestral home. Several organisations paid their tribute to Kalika Prasad Bhattacharjee including Sangeet Vidyalaya Silchar, Barak Upatyaka Banga Sahitya O Sanskriti Sammelan, Samilitta Sanskritik Mancha, Bhasha Saheed Station Saheed Sharan Samiti, and a few others.

A cultural program consisting of folk music followed in the latter half of the event. Local artists from the city dedicated their performances to the legend. While they performed with zeal, it was empty chairs witnessing their performances.

Choreographer and activist, Soumitra Shankar Roy, who helped the District Administration sort this event up told in his Vote of Thanks that, “We thank the Govt. and all appropriate agencies to recognise Kalika’s birthday as a day of observance. The very fact that he has been recognised, it will be celebrated for a lot of years to come and the scale too will grow up with time.” Roy also pointed out that how only the Govt. and the District Administration took an initiative to celebrate this day and tried to put up an event for the same.

Kalika Prasad Bhattacharjee worked and researched on folk and fusion. He shared the story about roots and origins through his music and lyrics. He took these messages to the world audience and got folk music the kind of appreciation and platform it deserved. On March 07, 2017, he died in a tragic road accident. Today, it is his 51st birth anniversary. The poor attendance is being heavily discussed on social media platforms. Is it due to lack of awareness and promotion or is it that the locals are losing interest in folk music. Also, was the event planned well enough to attract audience during the pandemic? The event leaves many loose ends.