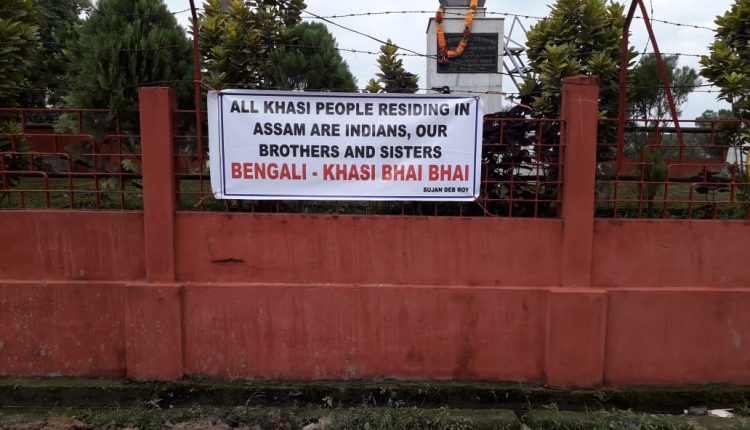 The racial profiling on the basis of language attracted immense criticism. Later, the Meghalaya Police posted on social media that all the posters have been removed and appealed to the residents of Meghalaya to maintain peace and tranquility.

Today in Karimganj district, banners went up in response to the Khasi Students’ Union’s postering. The banner read, “All Khasi People Residing in Assam are Indians, Our Brothers, and Sisters.”

The banners were put by a group of young individuals led by journalist and social worker Sujan Deb Roy. It was love in response to hatred, brotherhood for racial profiling. “I don’t think the Khasi Students’ Union’s point of view is the point of view of all Khasi people. Vasudhaiva Kutumbakam which means the World Is One is our ethos and that is what I wanted to remind everyone,” says Sujan Deb Roy.

He adds, “I felt very bad when I saw the banners raised by the Khasi Students’ Union which said all Bengalis in Meghalaya are Bangladeshis. The Bengalis are living in Meghalaya for ages and therefore it is unfortunate that they resorted to such racial profiling. The intention of my banners is to bridge the gap created by the postering yesterday. At the root of it, we are all one.”

A wrong response from other parts of the Northeast can intensify the situation further is what he believes. “That is why I decided to spread brotherhood,” he concludes.