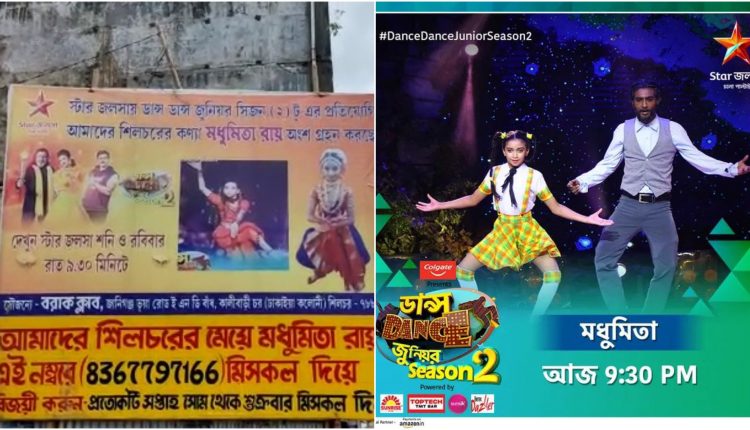 Silchar girl Madhumita Roy, who has been contesting in the popular Bengali dance reality show Dance Dance Junior of Star Jalsha channel, has made it to the final round of the show. Madhumita is a resident of Kalibari road in Silchar, Cachar and is merely 10-years-old. After coming this far, now the Silchar girl is just one step away from getting crowned as the champion of the Dance Dance Junior reality show of Star Jalsha. And her family members have requested the inhabitants of this valley to make her win this competition by voting for her.

Madhumita Roy studies in Class 7 high school and according to her family members, has been crafting the art of dancing since pretty early stage. “It is only because of the blessings and support of the common people who have seen her perform, that she was able to reach till the final of this show. She has always been a hard worker and has put a lot of effort into her campaign. Now I appeal to all the people of this valley to support her once more and vote for her so that she can come out victorious in this Star Jalsha Dance Dance Junior reality show”, said Madhumita’s father.

He also said that Madhumita’s mother had worked really hard for grooming and training her. “Her mother is her first-ever dance teacher. And even now, she’s with her in Kolkata”, says Madhumita’s father, who has been battling cancer for quite a while now. He mentioned that the ailment had caused them many obstacles throughout the journey, but when it comes to his daughter’s career and future, he didn’t let his fragile health condition get in the way and encouraged her to go forward with her plan.

It is noteworthy to mention that the voting window for the final round of the Dance Dance Junior show closes at midnight on July 16.