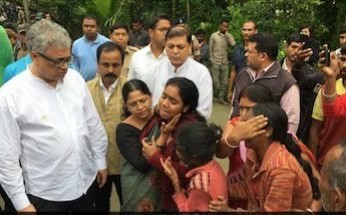 By barakbulletin On November 4, 2018 - 12:47 pm
Share
West Bengal chief minister, Mamata Banerjee has already condemned the brutal murder of five Bengalis in Assam’s Tinsukia district. Today, following her direction, a four-member team of Trinamool Congress reached Assam and met the family members of the victim. Members of Parliament, Derek O’Brien, Mohua Mitra, Mamata Bala Thakur, and Najimul Haq spoke to the family members and other local residents following which they updated the chief minister of West Bengal, Mamata Banerjee.
The delegation also announced a monetary compensation of Rs 1 lakh for each family. Today morning, they left Netaji Subhash Chandra Bose International airport and reached Dibrugarh through the airway. From Dibrugarh, they left for Tinsukia to meet the deceased’s family.

It is worth mentioning here that on August 2, 2018, a TMC delegation visited Assam to meet people who were excluded from the second draft of the National Register of Citizens. Their visit was cut short as the Assam Police and Cachar district administration did not allow them to leave Silchar Airport. In fact, there were episodes of confrontations between Police officials and TMC delegates. A woman police constable went ahead and filed an FIR against a TMC MP for physically assaulting her. The delegates were forced to spend the night at the airport and return back to West Bengal next morning. Mohua Mitra was a part of that delegation. This time, the Assam government did not stop them and there were no reports of any confrontations.