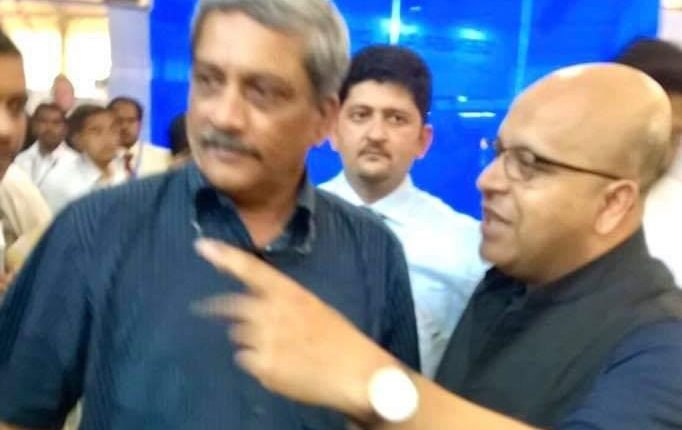 Manohar Parrikar- "What it means to be in public life," writes Subimal Bhattacharjee

On 17th March this year, the nation was shocked to receive the sad news of the passing away of Manohar Parrikar, the four-time chief minister of Goa and former defence minister of India. Battling pancreatic cancer for more than a year, he left for his heavenly abode working till the last day. Here was a leader whose simplicity, honesty, intelligence and humour were so visible. He was one of the rare breeds in public life in this country, who led by example and inspired so many. Indeed the nation has suffered a great loss in his death because a living and active Parrikar is a reminder to many to admire that one can still do politics, achieve and yet remain honest and simple.

Coming from Mapusa Goa and finally graduating from IIT Mumbai in 1978, he became the first IIT alumni to become an MLA. In a way, this is one of the major epoch which became an inspiration for many technocrats to join politics instead of looking away. His performance as a politician which started as an MLA in 1994 to become the chief minister of Goa on four occasions and also the defence minister of India is a journey full of accomplishments which he seldom announced or took credit.

I had the occasion to know him through my profession and also some of the close associates of his. Primarily they were on the defence sector. When he took over as the defence minister in the Narendra Modi government in November 2014, many of us actually were happy because a technocrat of his caliber and integrity with accomplishments in Goa would be able to make significant changes in the defence sector. And he did so. The ministry of defence with its huge ecosystem needed reforms for both operations and procurement policy as also address the major issue of the “One Rank One Pay” that was the party’s poll promise. He handled each of these issues with sincerity and depth in the 2 years and 4 months that he was in the helm of affairs of the ministry of defence. The extensive changes to the defence procurement policy (DPP) and the resulting DPP2016 that was revolutionary was something that he meticulously worked on.

The forward movement on the India US defence ties and the quality engagements he had with US defence secretary Aston Carter where both of them recognized the need to look at India especially unlike the other US allies was a major success for Parrikar. The agreement on the Defence Technology and Trade Initiative (DTTI) between the two countries was a significant achievement and India’s march to defence technology regime would be leapfrogged by this effort. While the Americans would have wanted Trade before Technology in DTTI, Manohar Parrikar was adamant that it has to be Technology before Trade. That was his mark and attention. On the OROP front, one knows how much he worked to ensure a fair deal to the service men and yet kept a close watch on the revenue budget management of the MOD. The list will go endlessly. A senior military officer once told me how Parrikar would go on and on with engineers of defence public sector units(PSU) discussing technical points to the core while the MOD bureaucrats, military leadership and the PSU senior management would be watching in awe.

As someone with a desire to get into public life, I always considered Manohar Parrikar as a role model. Besides sharing the birthday with him, I had the privilege of knowing him. The value system that he displayed was always inspiring. I’ve had sessions where he would get into asking about the details of equipment that General Dynamics built and how their research and development ecosystem worked. On one occasion, long after I had left my job as country head of General Dynamics, he caught me and took me to the General Dynamics stand in Defexpo 2016 in Goa and asked me about the functioning of the 30 mm turrets which formed a significant part of the armoured vehicles. All my ex-colleagues were enthused at his interest and details and later the onlookers accosted me.

Likewise in the International Film festival of India (IFFI) in Goa in November 2016 where my documentary ‘Memories of a Forgotten War’ was showcased in the Indian panaroma, Parrikar asked me how did I become a film producer and actually saw my documentary. At an India Foundation event in Goa once, he told he didn’t even know the ranks and insignias of military officers till he became defence minister. Even in airports I saw him on a couple of occasions where he would stand in the queue and shun the protocol available to him.

That’s the simplicity that most people in public life miss today. To shun attention was his hallmark and to work silently was his passion. The amount of good work that he has done to develop Goa is something that our politicians in Assam and Barak valley need to look to and learn. The way he changed the economy of the state is a lesson that has to be emulated. That is why I would say that Manohar Parrikar’s death is a big blow for India as he led by example and was one of the finest embodiment of what an ideal leader should be. I pray for the eternal peace of his departed soul.