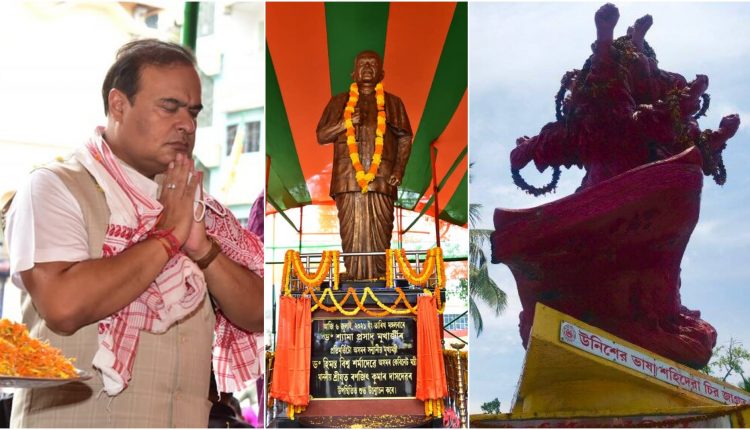 Manufacturing Quotes! When did Shyama Prasad Mukherjee ever say Assamese must be a compulsion in Assam

The newly-elected Chief Minister of Assam Himanta Biswa Sarma has remarked at a meeting that Shyama Prasad Mukherjee wanted the Assamese language to be made a “compulsion” in Assam. This remark of him has provoked a backlash across the state

At first, we’ll first verify the historical veracity of his statement. Then we will try to analyze the relevance of his statement in the extremist sub-nationalist politics of Assam. After the death of his father Ashutosh Mukherjee, while he was only 22, Shyama Prasad Mukherjee was elected to the Senate, the highest body of the Calcutta University, and in 1934, at the age of 33, he was appointed as the youngest Vice-Chancellor of the University. From 1934 to 1938 – during these four years, he introduced several new streams in the university. Under his apt direction, teaching in the University started in the fields of Home Science, Agricultural Science, Communication Engineering, Public Health, Experimental Psychology, Aeronautics, etc.

Mukherjee’s work as an educator in the later political arena is undoubtedly commendable. In 1935, he introduced Assamese at the undergraduate level. Not only Assamese but also Chinese and Tibetan languages ​​were introduced by him.

The primary aim of the university is to open all the doors of knowledge and science. Mukherjee may have had such thoughts in his mind when he started imparting education in different languages. But the Assamese language should be made compulsory in all educational institutions in Assam – there is no historical evidence to suggest that he ever made such a comment. This is nothing but a manufactured speech of the Chief Minister.

But why did he make such a comment? To understand its significance, we need to understand the nature of extremist sub-nationalist politics in Assam. Extremist sub-nationalists in Assam have always wanted to take away the mother tongues of other small ethnic groups in the state and impose the Assamese language on them. I hope readers will remember the discriminatory remarks of Dayananda Burgohain, the Chairman of the Assam Higher Secondary Education Council (AHSEC) a few months ago. Attempts were made to force Assamese into the Bengali-inhabited Barak Valley three separate times in 1961, 1972 and 1986.

To resist those impositions, many lives were lost and blood was shed over the years. Not only just language imposition but Shyma Prasad Mukherjee’s ethnicity Bengali community was also meted out with oppression, discrimination, racial profiling, and whatnot. In the ’80s, thousands of Bengalis were killed in the name of expelling foreigners. Places like Nellie, Goreswar, Shilpathar, Khoraibari, North Kamrup, etc. have made their place in the pages of history as a dark chapter due to the massacre of Bengali people in those places. Due to the ‘Bongal Khedao’ movement, thousands of Bengalis were forced to leave Assam for other states. Instead, extremist sub-nationalists managed to seize power by winning by a huge margin of votes.

Our incumbent Chief Minister is also a loyal soldier of that fierce sub-nationalist force. As a student and youth, he was directly involved in this kind of politics. The task that the extremist sub-nationalists couldn’t do with the help of a barrel of a gun and sharp blade of a knife, he wants to solve that strategically with politics. Shyama Prasad Mukherjee has over the years become an icon of the Hindutva ideology. Many Hindu Bengalis still look up to him with respect and esteem. Hence, if it is somehow spread in the mass that it was Mukherjee’s dream to make Assamese compulsory in Assam, then his job will get much easier. And it is for this purpose only that he has made such remarks.

The current Chief Minister of Assam, after taking the oath, showed his dream of a prosperous ‘New Assam’ to the people of the state. The people of the state, by keeping faith in the CM’s work efficiency, are also eagerly anticipating a prosperous and progressive Assam. By discarding extremist sub-nationalist politics and such discriminatory remarks, he should focus on the developmental work of the state. Only then will his reign be successful, otherwise he will forever be etched in the political history of Assam as a mere Bengali phobic extremist sub-nationalist only.

The author of this article, Kalparnab Gupta is Chief Convenor at Barak Democratic Youth Front and a student of IIT Bombay

Please note: The author’s original version is in Bengali. The English version of the story is a translation based on Barak Bulletin’s interpretation of the Bengali article.