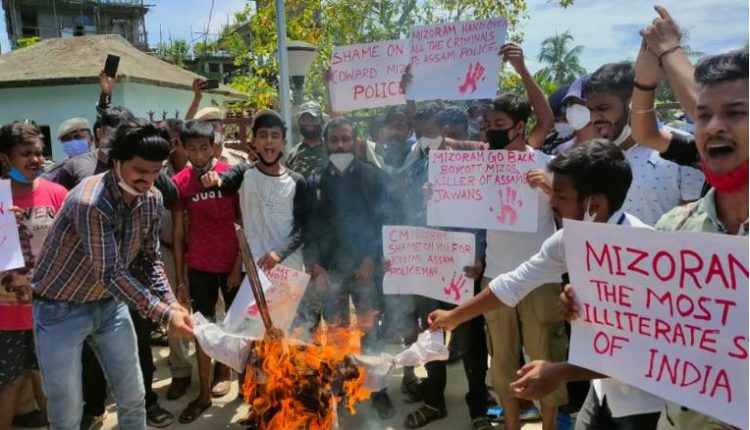 The death of the 7 Assam Police personnel in the recent cross-border firing between Assam and Mizoram in Lailapur has drawn condemnation from several corners of the state. To protest the violence, the Barak Democratic Front (BDF) has called a strike today which has been observed throughout the three districts of the valley. Today, a group of residents of Silchar belonging to different age groups came together to protest the killings of the Assam Police officials by the Mizoram police and local Mizo miscreants by showcase a mass demonstration, where they urged everybody to boycott the Mizoram government and condemned their Chief Minister. The protest rally accumulated near Rangirkhari point in Silchar and then proceed with the rally towards Mizoram House in Sonai road, where they burnt an effigy of Mizoram Chief Minister Zoramthanga.

The rally started around 11 am on Wednesday, where several youths were seen carrying banners condemning and calling out the Mizoram government for their violence. One of them was also seen carrying an effigy of Mizoram CM Zoramthanga which they burnt in front of the Mizoram House. Most of the protestors belonged from the student community and they didn’t represent any social or political organization, as this mass demonstration was meant to be free to all kinds of people irrespective of their affiliation or occupation.

On behalf of the protestors, Snehal Chakraborty, a student, said “We all saw a few days back, how the cross-border firing took the lives of 7 people of Assam, including both police and civilian. In the video clips, we also saw civilians on their side holding sophisticated rifles and guns standing side-by-side with Mizoram police who were firing at Assam police. We want to know how come their civilians are in possession of such advanced weapons of all sorts. Are they backed by some external forces? Or are they backed by their own state government? We’ve also appealed to the centre as well as the state government to look after the families of the bereaved and provide support for the rest of their lives, and also bring justice by probing into this matter. This is the agenda on which we all have come together today to show mass demonstration regarding this issue.”

Basudev Sharma, also one of the protestors, said “I’m deeply saddened by the demise of the 7 Assam Police officials who were shot dead by officials of the Mizoram police and some Mizo miscreants. Any dispute can be solved through dialogue, but this kind of violence that has claimed lives is condemnable and inhumane. We demand the immediate intervention of the Centre on this issue so that further such clash doesn’t happen. If this conflict doesn’t end soon, then we’ll be bound to protest on a much bigger scale next time.” The protestors through sloganeering demanded strict action against the Mizoram police officials and the civilians responsible for the death caused on the Assam side.

Throughout the demonstration, slogans like ‘Mizo Police go back’, ‘Mizo aggressors go back’ erupted the entire area. Several placards and banners were raised where Mizoram police and government were condemned. Later, they burnt the effigy of the Mizoram CM Zoramthanga shouting all kinds of slogans against the brutal killing.