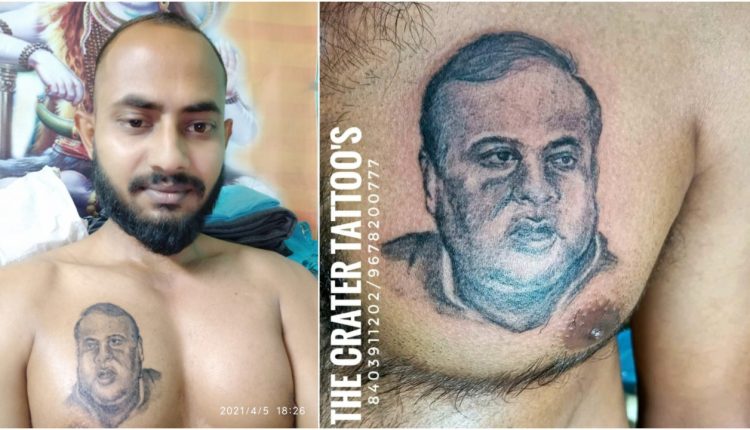 Meet Ashish Ghosh of Karimganj who has inked Himanta Biswa Sarma on his chest: Beyond party allegiance

India is a country where worshipping celebrities in the same line as Gods is nothing new or unheard of. Be it movie stars or cricketers or even politicians, perceiving them as larger than life has manifested in their fans going to bizarre measures to proudly flaunt their idolisation to the outside world.

Last month, during Prime Minister Narendra Modi’s visit to the Karimganj district for the election campaign, Hussain Ahmed, a specially-abled fan of PM Modi who had lost his legs, went to attend the event to watch and hear the PM speak. Now, in another instance, a person named Ashish Ghosh of Karimganj has tattooed an image of State Minister and NEDA Chief Himanta Biswa Sarma on his chest, as a sign of admiration for the BJP leader. A photo of his chest flaunting the newly inked tattoo of Himanta Biswa Sarma was posted on Facebook which claimed the instance to be the first time ever happening in the state.

Ashish Ghosh is a resident of Silchar road of Karimganj. An employee working at Airtel telecom, Ashish said that he has been following Dr. Himanta Biswa Sarma since his Congress days. “I’m neither BJP nor Congress supporter, but my love and admiration for Himanta Sir date back to his days in the Congress. There’s something dynamic and kind about him which I think hardly any other political leader possesses these days”, says Ashish Ghosh while talking to Barak Bulletin over a telephonic conversation.

Adding he said, “I love and admire Himanta Sir like my own family member. The only motive behind making this tattoo of him is that I dream of clicking a picture with him one day with his hand wrapped around my shoulder. That is my only dream and I’m still looking forward to it which I hope this small gesture of dedicating this tattoo to him would at least make him take notice of me.”

Although Himanta Biswa Sarma did visit Barak valley and quite specifically, Karimganj district for the election campaign, his ardent fan Ashish Ghosh, unfortunately, couldn’t capitalize on this opportunity to meet his idol. But as he said, even that wasn’t enough to give up on his dream as he still aspires to get to meet his idol someday and get to click a photo with him.

When asked what exactly about the BJP leader that he admires so much, he quickly went on to say that it was during his stint with the Congress under the Tarun Gogoi government, that he first took notice of Himanta Biswa Sarma. “That gentleman has done a lot for the state of Assam. With the help of the TET (Teachers’ Eligibility Test) examination, so many educated unemployed youths around the state have gotten jobs. Then when the Corona pandemic hit us, he single-handedly took the responsibility of curbing its impact in Assam and did a wonderful job. If it wasn’t for him, the condition of the state would’ve been much worse for sure” said Ashish Ghosh, hoping that he gets to meet his ‘God’ someday.

But if his dream does come true someday, and he gets to meet his idol Dr. Himanta Biswa Sarma that day, what would he have to say to the state minister? “Although Himanta Sir has done a lot to uplift the educated youths of our society, I still feel there are lots of such educated young people still being unemployed, and my only request to Sir would be to make them employed as well just like he did with the TET, which I firmly believe he eventually will.” He also assured that in the coming days, he is also planning to ink another tattoo of his role model Himanta Biswa Sarma, only this time on his entire back with a full body picture of the BJP politician.