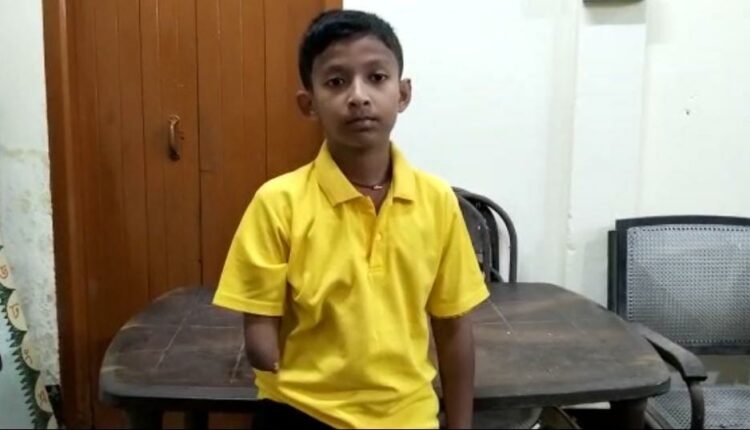 Meet Biprajit Deb, a paralympics talent in making who never lets his disability be an excuse in his pursuit of excellence

What comes to your mind when somebody asks about your best childhood memory? Is it the time you spent with your friends playing in the grounds? Sports holds a special place in our hearts and has been an integral part of our life. With changing times and newer technology, today’s children are somehow losing touch with the playgrounds, instead ‘Battlegrounds’ have taken their place.

In spite of the rising popularity of mobile games, Biprajit Deb of Silchar, a specially abled child of nine years, unlike his peers, has found his calling in the sport of Table Tennis. His interest and liking for the sport is incredible and the boy has been working earnestly towards his dream of playing in the nationals one day.

Biprajit Deb, a nine year old boy, has recently returned after playing the ranking tournaments held in Guwahati this November. As informed by his parents, Biprajit showed interest in table tennis for the first time at a Sports Fest– ‘Cholo maathe jaai’ held in the District Sports Association a couple of years ago. Out of the many sports like Badminton and carrom and various other events being played there, Biprajit was most fascinated by the game of Table Tennis. He was merely six years old then and was curiously watching the game. Seeing the spark in his eyes and interest in the game, his parents brought him to the DSA the next day to start his coaching.

He has been guided throughout by his coaches Partha Deb and Subhasish Chakraborty since then and with his family’s incessant support and his tireless efforts, he was able to get selected to play for a ranking with the general category children.

In his starting days, he also got a lot of motivation and guidance from the Indoor Secretary of DSA, Sanju Roy. All of the coaches have been guiding and preparing him for the best. “He has been a great player with a lot of potential since the very beginning and has caught up really fast. Though he has not been able to practise in a regular way because of the lockdown, he has been showing great performance throughout”, said one of his coaches, Partha Deb.

He had shown great performance in his first out-station tournament held in Golaghat in the month of August this year. Biprajit had got a great opportunity to play in the inter-district and two ranking tournaments held in Guwahati from November 5 to November 13, but unfortunately has not been able to secure himself a ranking this time. “Biprajit showed excellent performance in the tournament in spite of having a really tough competition this time, but this was just the beginning for him and will definitely show improvement with more practice and maturity in the future”, added his coach.

Biprajit is a kid with great calibre and has been improving day-by-day with increasing practise. Another coach of the Paralympics category, on realising his potential and witnessing his prowess and dedication, has been preparing him further for playing in the National team of the Paralympics. His coach however, mentioned that he is a little too young to play in the Paralympics, as there is no age-group in that tournament. He would be able to display a better performance with a bit more maturity and a lot more of practise.

Biprajit is surely a prodigal child and the pride of his family. He is a student of Kendriya Vidyalaya, Silchar and studies in the 4th standard. He is a bright student academically. He is also passionate about art. He is a 1st year student of art and has obtained a ‘star’ score in the subject from Calcutta University. He is one of the only two people who have secured this star mark, said his proud father.

A child with great potential and merit, Biprajit, apart from table tennis, is also an expert cyclist. He has also proven his talent in the field of arts. A specially abled child since birth, has never let this disability be an excuse in his pursuit of excellence.