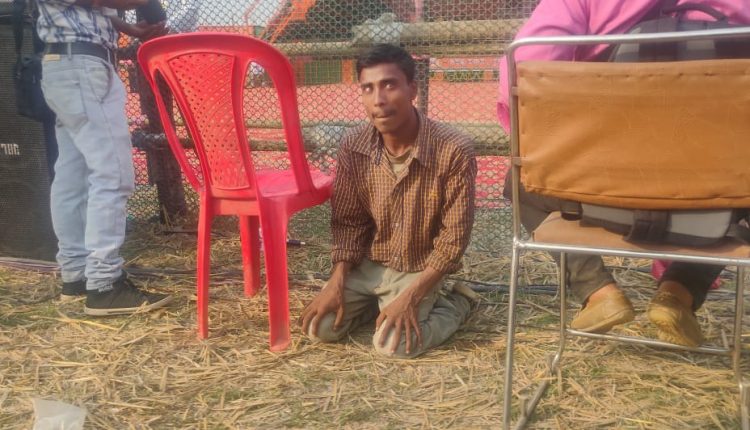 In the Oscar-winning movie, ‘Slumdog Millionaire’ we saw a boy jumping in a pool of poop to get a glimpse of the great actor – Amitabh Bachchan. It was a true story. We all know about Sudhir Kumar Choudhary (also known as Sudhir Gautam) – the Indian teacher who paints the tricolor on his body and attends cricket matches across the length and breadth of the country. The visual of this man waving the flag inspires many including the great of cricket Sachin Tendulkar whose name is always there on Gautam’s chest.

A similar inspiring visual emerged from the Bhatkhal ground in North Karimganj where Narendra Modi addressed a sea of supporters yesterday. Specially abled Hussain Ahmed who has lost his legs crawled to the ground to watch and hear the Prime Minister and NEDA chairman Himanta Biswa Sarma. He was sitting on the ground but in the first row and quietly witnessed the entire programme.

“I started listening to Narendra Modi’s speech in 2014 and gradually become a fan of this man,” said Hussain Ahmed. He added, “Later, I also got inspired by Himanta Biswa Sarma.”

The inspiration became an obsession. Like Sudhir Gautam, Hussain Ahmed also remains present in each and every venue where Himanta Biswa Sarma is speaking. “If at times I do not have the money to travel and attend his programme, I beg or borrow and then travel to the ground, wherever it may be in the district,” informs Hussain Ahmed.

Each time a leader of national or state repute visits Barak Valley, the next day selfie with that leader takes over the social media feeds. Hussain Ahmed does not have any such aspiration. “I don’t even inform anyone that I am visiting Himanta Biswa Sarma’s programme. I do this out of passion as this is something that mesmerises me,” says Ahmed.

After Himanta Biswa Sarma and Narendra Modi addressed the gathering, Hussain Ahmed crawled back miles to reach home. But he had a smile on his face all throughout.