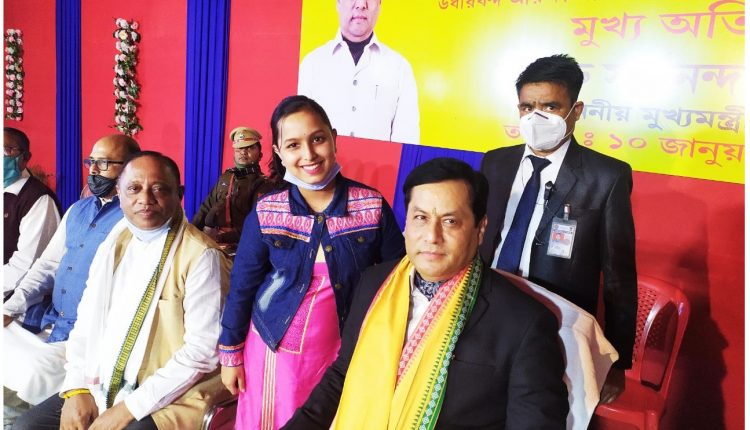 Here is how Udharbond's Bedopragya mesmerised CM Sonowal with her singing

Eleventh-grade student Bedopragya is the only daughter of Bijan Bhattacharjee and teacher Kusturi Bhattacharya, residents of Udharbond Six Mile. After Chief Minister Sarbananda Sonowal’s visit to Silchar this time, adolescent Bedopragya has become quite a sensation now. A very talented vocalist, the Chief Minister got so fascinated by Bedopragya’s songs that he has invited her to a cultural event to be held in Brahmaputra Valley in advance.

It was in October 2018 when the Chief Minister arrived at Barak. On his way to Silchar, he attended a function at Udharbond. On that occasion, Bedopragya performed the song “Bande Mataram”. She was an eighth-grade student then. The Chief Minister was impressed by the extraordinary performance of the girl. He immediately reached out to Bedopragya and offered her a Fulen Gamucha and a bouquet of flowers. Her performance got fame overnight.

The next morning at ten-thirty Bedopraya met the Chief Minister with her father. Silchar MLA Dilip Kumar Paul and Deputy Commissioner Keerthi Jalli were present along with them. The Chief Minister asked Bedopragya to perform at various cultural events in the Brahmaputra Valley and wanted her to act as a bridge between Barak and Brahmaputra through her music. He asked Keerthi Jalli to take care of her for realising this dream without any difficulty.