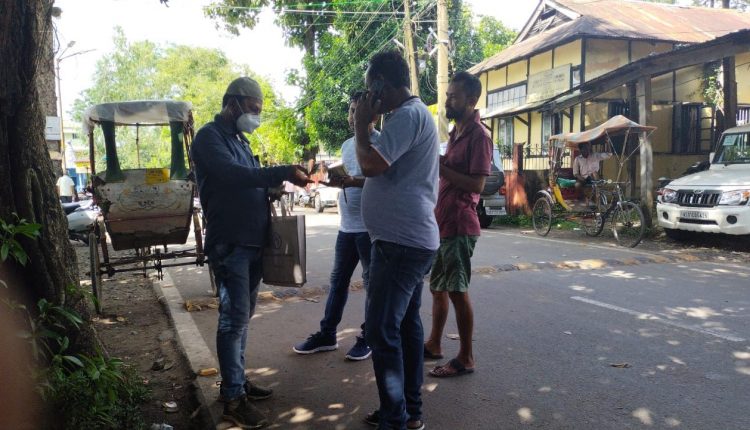 Chief Minister’s clear warning to officers remain unheard in Silchar. Himanta Biswa Sarma gave clear instructions to Circle Officers that they must ensure Settlement Office is free of brokers and authorised middlemen. Last week, Barak Bulletin reported how brokers were openly operating at Silchar Settlement Office. Astonishingly, despite putting out everything in the public domain, the brokers are indifferent.

Today, a sting operation was carried out by Barak Bulletin’s correspondent and brokers were caught on camera while taking commission from officials deployed in the Settlement office. Not only one or two, unauthorised middlemen were present in tens and twenties. When they saw the contingent from the press, they ran as fast as they could.

One individual identified as Mono Das is allegedly the leader of the group of brokers. Even today, he was spotted inside the office. Other middlemen, who could not escape, gave an interview. “We came here just like that. We came here to go to the canteen,” and many other such irrelevant answers were given by them when asked why were they inside the Government office premise. This was happening in the absence of Settlement Officer JR Lalsim. When the media personnel went to take a comment from her, they found her office was locked.

Speaking with Barak Bulletin, Lalsim had said that she will take strict action if unauthorised middlemen are found in the Settlement Office. However, no such actions were visible in the office premises.

Locals have alleged that they are forced to pay hefty commissions to secure permission, registration certificates and other documents essential to sell or buy land. The brokers with the help of officers inside Settlement Office, are allegedly making fake documents and selling plots that belong to owners who no longer reside in Silchar. One MLA of Manipur has plots in Rongpur Part I. According to sources, parts of his plots have already been sold without his consent.

“We admire the decision taken by the chief minister to make Settlement Office Dalal Free. He has shared his intentions and now it is upto the local MLAs and MPs to ensure that the instructions are followed,” said a local senior citizen.

Silchar MLA Dipayan Chakraborty voiced his concern at the presence of brokers in Settlement Office. “From the day I took oath, it has been my aim to ensure that there is no presence of brokers in the Settlement Office. I respect the initiative announced by the honourable chief minister and I assure that I will everything in my capacity to make Settlement Office Dalal Free. I have spoken with the deputy commissioner about this, there are brokers from other constituencies as well, so, the matter is complicated. But, I am on it and will try our best,” said the MLA.