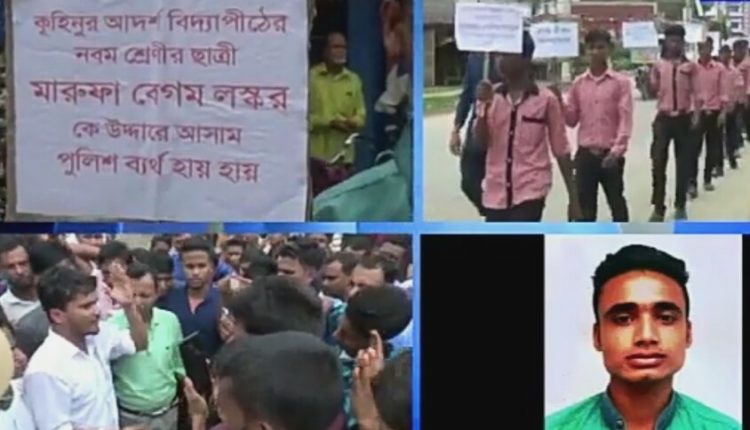 By barakbulletin On June 9, 2019 - 12:03 pm
Share
More than 100 students gathered in Hailakandi demanding action against Suraj Nath. Nath is a resident of Rajeshwarpur area in Hailakandi district ans is a teacher of Kohinoor Adarsha Bidyapit school. A student of the same school Rejwana Begum Khatoon (name changed) is missing since Wednesday, June 5, 2019.

Father of the minor, a teacher by profession lodged a missing diary in Lala Police station on June 5. The students and members of several organisations alleged that Nath kidnapped the minor and that is why he is missing too. They submitted a memorandum adressed to the superintidentent of Hailakandi Police.
Spokesperson of one the associations said that they had plans of staging a massive agitation but considering the current situation of Hailakandi district and keeping in mind the recent communal clashes they have been restricting themselves. “On the auspicious occassion of Eid, Suraj Nath kidnapped a minor Muslim girl and the Police is yet to take any action. We want the Police to arrest Nath as soon an possible or else the agigation will grow bigger,” said the spokesperson.
The Police said they have recieved a complaint and they are working on it.
২৪ ঘন্টা সময়সীমাarrestkidnapperKidnappingLalaPoliceউদ্ধারলালা
Share FacebookTwitterWhatsAppEmailLinkedin
You might also like More from author
News