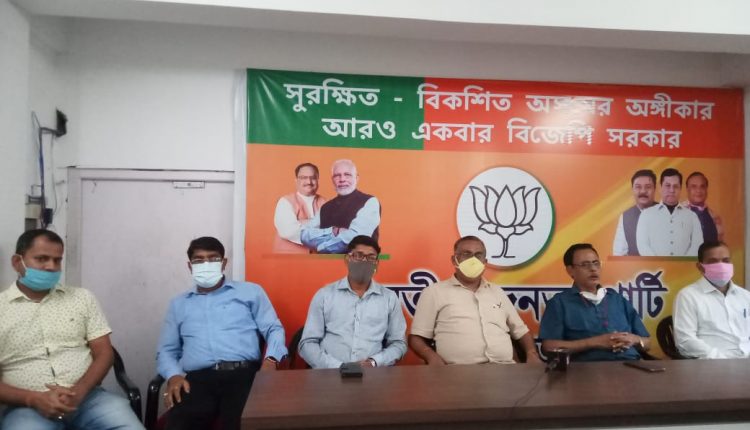 During the election campaign, everyone starting from the local candidates to the state level and national level party star campaigners had repeatedly claimed that “People in the Muslim community are no longer afraid of the BJP, they have learned to vote for the BJP.” Whereas, just a day after the announcement of the results, based on the preliminary survey, the members of the Cachar district BJP are talking just in the opposite tone.

They allege that in the areas where the number of Muslim voters is high, the BJP candidates got fewer votes. This means that people from the minority community did not vote for the BJP candidates, so the BJP did not get the expected results despite working so hard for the betterment of the valley. The words were spoken in public by holding a press conference at the Itkhola office on Monday afternoon.

They said, “In the last five years, the BJP government has launched several projects with the entire state for the betterment of the Barak Valley and everyone in the state has benefited from them. However, people from religious minorities have directly opposed the BJP in the elections. They voted against the BJP responsibly and in large numbers, which is why the party’s candidates in the Barak Valley didn’t fare as expected. We could not guess that people from one community would vote this way only based on religious identity. Maybe this time we will change our plans a bit so that this does not happen in the future.”

But why do they suddenly feel like that? In response to this question, they said, “The number of minority voters is low in several areas, including Silchar. The BJP candidates have won easily there and got good votes. Our preliminary survey found that people from the minority community voted in more than 90 per cent attendance. Those who were outside the Cachar district reached their respective area of polling on or before the election day and voted responsibly. Needless to say, they voted for the candidates of the Congress-AIUDF alliance. While the people of the Hindu community are indifferent in this matter, they did not care about going to the polls to vote for the sake of their community. That is why the situation has come to this point today. Muslim candidates have won 8 of the 15 seats in the Barak Valley, and none of them is from the BJP. If the people of the Hindu community still cannot predict the future, they will suffer in future.”

How much damage has the rebel candidates of the party done? The district BJP statement in reply to the question said, “A few have rebelled against the party and due to them, some areas got affected, especially the Sonai constituency. Even Thoiba Singha of Lakhipur constituency managed to get about twenty thousand votes, still, the BJP candidate eventually won there. In Silchar, the former MLA could not make much of an impact, with the BJP candidate garnering nearly one lakh votes. This will be reviewed in the future as well and will be monitored so that such mishaps don’t happen before any election.”

The District BJP claims that the overall votes have increased this year even though the BJP’s seats have decreased. They said that not only in the eligible seats but also in the areas where the BJP candidates were defeated, the party’s candidates got new votes breaking all the past records. But since the election is a numbers game, there were some equations that have gone awry and thus we failed to secure some seats.”

Following the instructions of the Election Commission, the BJP members had already announced that if their candidates win, there would be no victory lap, and no one would play abir or light firecrackers. After the conclusion of the election, they indeed have kept their promise and there was no victory lap as well. Besides, the party’s young brigade has been deployed in various responsibilities to handle the Corona situation, said senior leader Nitya Bhushan Dey.