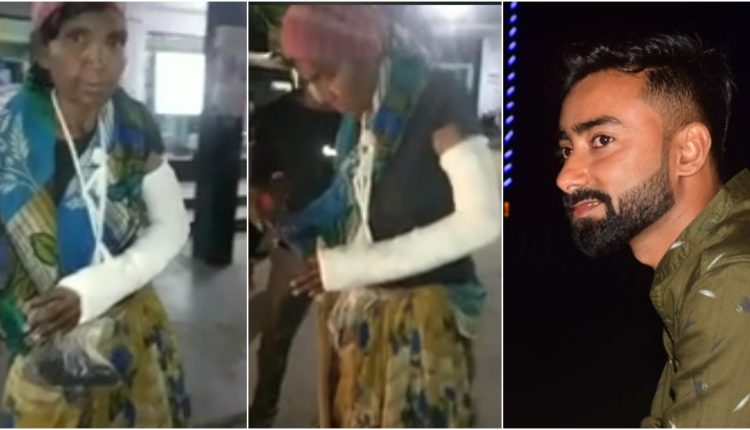 Cruelty has reached a new level in Silchar. A mentally impaired woman who lives by the road in Chencoorie was assaulted by unidentified miscreants last night. She has been staying in Chencoorie road for a while, but last night, pedestrians saw her crying. The locals informed activist and social worker Subir Dhar.

Dhar along with his friends reached Chencoorie road and found that the woman was near Police Patrolling Station at National Highway Road. They spoke with the mentally impaired woman who has no clue about her family members and took her to Silchar Civil Hospital. There they got to know that she had fractured her hand and therefore, they had to take her to Silchar Medical College and Hospital at night. Doctors plastered her hand and prescribed her medicines.

Who assaulted her and why is something yet to be known. The woman has got some relief after the treatment and now, hopefully, she will recover in time.

This is not the first time Subir Dhar has helped a homeless woman in trouble. Last year, a woman in Hospital Road was hit by a speeding rickshaw. She got a deep cut on her leg after the accident. But as it happens in most cases, there was no treatment. Soon the wound got infected and the woman started crying in deep distress. When Subir Dhar got to know about it, he and his friends took her to the hospital, and now she is out of pain.

Members of other NGOs, activists, and social workers provided food to people living by the road during the lockdowns last year. Some donated sanitisers, masks and a few even took the initiative to get them tested for COVID19.

A woman in Rongpur area, who has been living by the road for years was found pregnant. Traffic Police in charge Shantanu Das observed the situation and took her to the hospital. It is possible that miscreants took advantage of her mental condition and that is how she got pregnant. Under Das’ supervision, she was provided proper treatment and she delivered a baby girl. Das also took the initiative to send her to the Tezpur Mental Hospital for treatment. The newborn girl was sent to a home where she would be under care.

So, while cruelty is on the rise, it is also true that people are going the extra mile in order to help the ones in need.