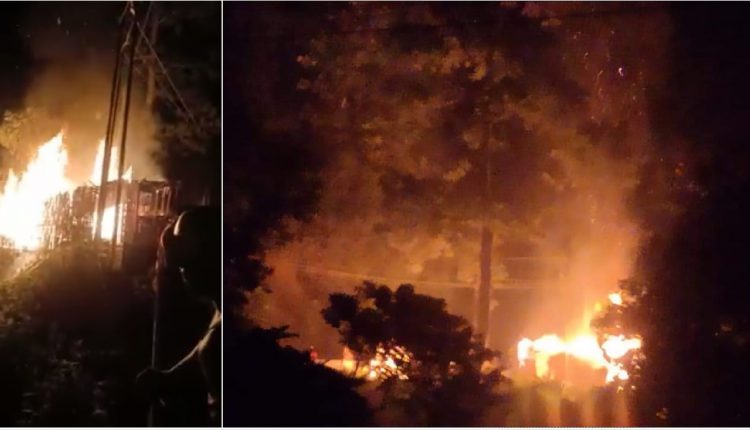 Tension prevails in the Assam – Mizoram border at the Lailapur area. Last night, the locals in Cachar district’s Lailapur area were victims of yet another Mizo aggression. The neighboring states are often at loggerheads due to territorial disputes. Yesterday, Superintendent of Cachar Police, Bhanwar Lal Meena visited the spot with a special team. But the visit did not go well.

Soon after his return, at night, the miscreants from Mizoram’s side entered Cachar’s Lailapur area and burnt a few houses and stalls to ashes. They have beaten a few locals too and after causing the havoc, they ran away. “As many as ten individuals went to the Mizoram side from Lailapur to get the wounded residents back. They haven’t returned yet,” said a local resident while talking to media.

He added, “For the last 15 days, the people of Lailapur are getting tortured almost every day. The miscreants from Mizoram well guarded by their police enter Cachar and throw hand-made bombs at our houses. They also beat commuters. Because of the lockdown, most of the Mizo people living in Cachar have returned to their native. They have nothing to lose here and that is why they have started doing this so aggressively.”

SP Bhanwar Lal Meena rushed to the spot again after he heard about the incident. “We got reports of a few temporary houses and stalls being burnt. Local police immediately reached the spot and brought the situation under control. We are taking steps to ensure such incidents don’t occur again. We have also established contact with the counterparts in Mizoram,” said Meena.

Rubbishing claims of handmade bombs being thrown at the residences in Lailapur, SP Meena urged the people of Cachar to no spread or believe in rumours.

As per reports, the miscreants in Mizoram had allegedly attacked a Bengali driver last night. “One person got injured, but what I got to know is that his condition is stable,” informed Cachar SP.

Locals in Lailapur also stated that the miscreants have installed several gates in Vairengte, Kachudaram (Hailakandi) and other entrances to Cachar. “All the commuters are stuck there, we have been told as many as 400 vehicles are parked and all of them are fearing death. We urge the administration to raise the issue at a higher level,” said another local resident of Lailapur area.