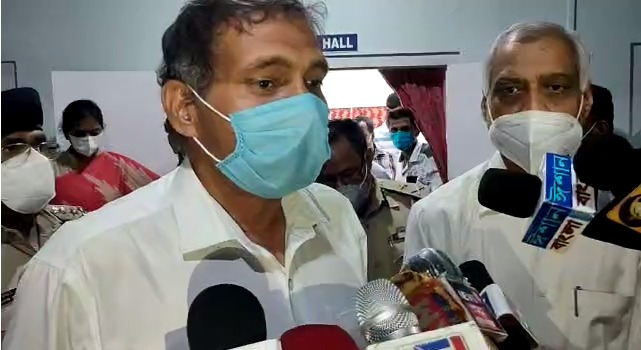 Tension at Assam – Mizoram border in Cachar district’s Lailapur area kept escalating in the last seven days. The Mizo miscreants marched inside Assam’s territory and burnt houses and shops to ashes. On the other hand, the Mizoram Government blamed the Cachar and Karimganj administrations for the trouble and accused them of blocking traffic which disrupted supply of essential commodities in the state.

Senior officers of both Assam and Mizoram government met several times but could not reach a pragmatic conclusion. That is when the Central Government decided to involve the Ministry of Home Affairs. Joint Secretary, Ministry of Home Affairs (incharge of North East) Satyendra Kumar Garg traveled to Silchar and held a meeting at the Circuit House with both the parties.

After the meeting, Garg briefed the media and said that it was a “fruitful” dialogue between the two governments and asked Home Secretary, Assam, Gyanendra Dev Tripathi, to share the specifics.

Tripathi said that the meeting in presence of Garg managed to achieve a breakthrough. “The Government of Mizoram thankfully gave a consent to withdraw the force that was enforced after the recent chain of events,” said Tripathi.

He shared that the agenda of the meeting was to ensure the restoration of peace and vehicular traffic.

Locals in the Lailapur area and OC Dholai informed that the Mizo miscreants guarded by the local force encroached over three kilometers inside Assam’s territory. The delegation that met today, according to Tripathi, has not discussed the territorial dispute. “This is something that the two state governments along with the government of India will work on. Today’s meeting was to ensure the restoration of normalcy and peace between the people living in two states,” said Tripathi.

However, he added, the Mizoram government has agreed to withdraw its forces from the disputed territory and move its people back.