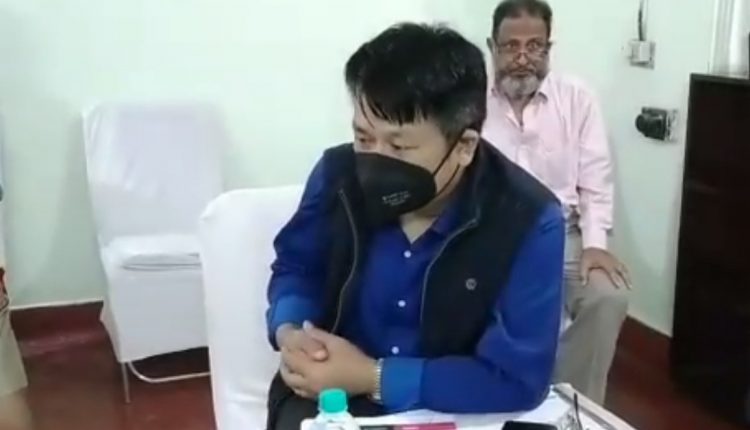 "Mizoram won't withdraw forces" Mamit DC after meeting in Karimganj; "There is peace because of the deployment" he adds

There are thousands of trucks parked on Assam’s side of the interstate border with Mizoram. The truckers are making food sitting in the shadow of their trucks loaded with essential commodities. Some of them are playing cards while a few are simply doing nothing. Rain washed nights and sunkissed days, the truckers are ready to get tanned but are not willing to drive through to Mizoram. “There are armed men and we feel unsafe,” is what they say in unison.

Two of the seven sisters in Northeast, Assam, and Mizoram have been on loggerheads since mid-October. A Central Government intervention could not sort the issue. Yesterday, in Karimganj’s Ichabeel tea-estate a meeting was held between Karimganj DC, MP Ambabutham and DC Mamit, Lalrozama.

Mizoram continued its aggressive stance. DC Mamit, Lalrozama, while addressing the press after the meeting said that restoring peace and tranquility and supply of essential commodities were on the agenda of the meeting between the two offices and its officers. When asked about the forces deployed on Assam’s territory, Lalrozama responded, “Whatever is happening it is happening in Mizoram’s territory.”

Time and again the journalists asked about the report of Surveyor of India. But DC Mamit had one specific answer to it. “This is something that would be discussed by appropriate people at an appropriate time.”

The journalists asked about the forces and when they would be withdrawn and to that DC Mamit gave a response which can be termed as a complete ‘U’ turn from what was decided in the meeting in presence of Joint Secretary, Northeast Satyendra Garg. DC Mamit – Lalrozama said, “Mizoram won’t withdraw the forces. There is peace and tranquility at the bordering areas because of the deployment and that is why it will stay.”

After the meeting on October 21, 2020, Garg briefed the media and said that it was a “fruitful” dialogue between the two governments and asked Home Secretary, Assam, Gyanendra Dev Tripathi, to share the specifics. Tripathi in presence of Garg and his counterparts from Mizoram said they have managed to achieve a breakthrough. “The Government of Mizoram thankfully gave a consent to withdraw the force that was enforced after the recent chain of events,” said Tripathi.

Not only Tripathi, former chief secretary of Assam Kumar Sanjay Krishna also reiterated the same. In an interaction with Barak Bulletin he said, “Two things were decided in the Commissioner-level meeting where Joint Secretary – Northeast (Satyendra Garg) was also present- withdrawal of Mizo forces and passage of essential commodities. We are ensuring the passage of essential commodities but I have requested to the Chief and Home Secretary – Mizoram, that Mizoram should complete its commitment. They have agreed to withdraw forces in that meeting but on the ground that it not happening,” asserts Kumar Sanjay Krishna.

More than 1400 trucks were escorted by Assam Police after that meeting but the forces deployed by Mizoram have not moved an inch back. Instead, an LP School operated by the Government of Assam since 1971 was bombed, allegedly by Mizo-miscreants with the support of the armed forces there.