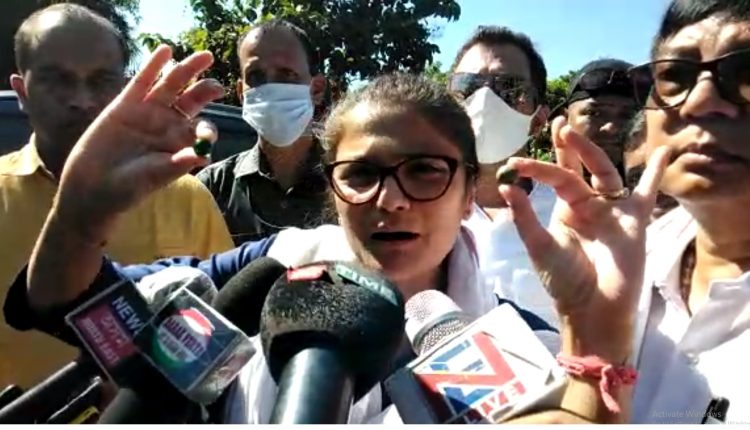 Mizos attack Congress delegation inside Assam with Gulel; "Will giftwrap those marbles and send to CM," Sushmita Dev

The BJP won the elections in Assam in 2016 by keeping ‘Jati Mati Bheti’ at the heart of its election campaign. Mati means land and the BJP said it would treat every inch of Assam’s land with utmost importance. However, on the ground, people of Assam are forced to leave their own land and if they show resistance, they are attacked with various weapons.

Today, a Congress delegation visited the Lailapur area located in the Dholai Assembly constituency. This is the area where Mizo miscreants have run havoc since October 17. First, several houses and shops were burnt, then two schools were bombed and a resident has been abducted and killed.

Leader of Opposition in Assam, Congress’ Debabrata Saikia, National President of Mahila Congress Sushmita Dev, North Karimganj MLA, former minister Ajit Singh and several other senior Congress leaders went to the borders. While they were on their way to Khulecherra area where the first school was bombed, they spotted a bamboo barricade right at the edge of a bridge. “The Mizoram Police stopped us there and asked us to go back,” informed Sushmita Dev.

“They were claiming that from the bridge it is Mizoram’s area and we cannot enter. However, the construction of that bridge was funded by the Government of Assam and former MLA Girindra Malik had laid the foundation stone,” she added.

Inside the territory of Assam standing on a bridge built by the government of Assam, the Mizo miscreants guarded by armed officials from Mizoram Police have asked the delegation to go back. “One man from that side of the bamboo came and tried to explain things to us in Hindi. The civilians standing with Lathis got angry and said that only the Mizo language will be spoken. They kept shouting go back, this is not Assam’s land,” informed Sushmita Dev.

Do watch the video to get a glimpse of how Mizo miscreants are terrorising the people of Assam in presence of their Police.

When the delegation was standing there, the Mizo miscreants launched an attack on them with Gulail (wooden slingshots). Journalists, leaders of political parties, and others who accompanied the delegation rushed away from the spot. “We have kept the marbles that were shot at us. Will gift-wrap the marbles and send them to the chief minister of Assam, Sarbananada Sonowal. It is for them to know that the people of Assam are getting inside the territory of Assam,” asserted Sushmita Dev.

She took a jibe at the governance and called it “weak.”

“Assam Police and Assam government could not provide safety to the leader of the opposition and could not escort the delegation to the area that we wanted to visit. It is a matter of shame and shows that Sarbananda Sonowal is just a face and nothing more. Assam Police’s top officers, chief secretary of Assam were well-informed about this visit yet their officers could not guarantee us access to a spot inside the boundaries of the state, that is the state of governance in Assam,” said Sushmita Dev.

She took a jibe at Northeast Democratic Alliance (NEDA) that was formed by BJP in association with other political parties in the Northeast. The Mizoram government as well as the Assam government is a part of that alliance. “NEDA means North East Disaster Alliance,” said Sushmita Dev. “Himanta Biswa Sarma must take responsibility for the disaster that has shaped in the border and must immediately resign,” she added.