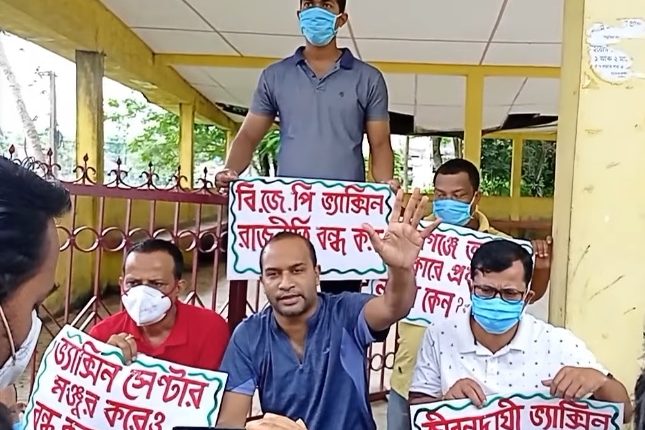 Since the Covid vaccination drive started for common people, especially in the 18+ category, several places have reported a shortage of adequate vaccines. Although the drive is still officially on, the vaccine stock is getting emptied within a matter of days of arriving in a certain vaccination site, as the rush of booking an online slot for the vaccine is too high. In the city of Karimganj too, the shortage of adequate vaccines has created a feeling of unrest among its citizens. Today, North Karimganj MLA Kamalakhya Dey Purkayastha and a few others sat for a dharna demanding the ruling BJP party to stop doing ‘vaccine politics’.

While protesting the lack of an adequate amount of vaccine, the Congress MLA accused the BJP of playing politics with people’s lives and this shortage of vaccine in Karimganj is just one of many examples. He said, “If the BJP honestly wanted to battle this pandemic and help the people, their stance should’ve been like opening up of vaccination sites in different places of the city according to the demand. And the people should get to decide where they feel convenient to get themselves vaccinated. But rather than talking about all these pertinent issues, they’re now bringing up other issues like Coal syndicate, busting of rackets, etc. Yes, if corrupt people are caught doing dishonest business, they should definitely be nabbed. But why now all of a sudden, when we’re already struggling to fight this deadly virus? This is all just a strategy to divert the issue from the vaccine crisis to something else, and for this, the people of Karimganj will never forgive the BJP.”

Kamalakhya Dey Purkayastha then went on to say that the BJP leaders have no attachment for the people of Karimganj, that’s why they’re being deprived of vaccine and other essential medical facilities. “We can see how our neighbouring district has already started ward-wise vaccination drive, but here in our city, people are not even being able to book their slots for vaccination. A few weeks back, our state’s Health Minister visited Karimganj and gave strict orders to complete the ICU ward here. But everyone can see that the ICU ward is still left incomplete. Whatever work has been done to complete the ICU ward happened due to the repeated demand and protest of the people. The Minister came, we thought circumstances would get better as he assured people that the work would get completed in 20 days. Now those 20 days have gone past, this second wave too will get over. Already 35 people in our district have died due to this second wave, 33 in the first wave of the Corona. We the people of Karimganj will never forget the ruling government for playing politics with their lives and they’ll be solely responsible for any deaths happening due to Covid.”

When the Karimganj district health department was contacted, they said, “The supply of vaccines in the district is relatively low, so it is not possible to provide it to everyone at once. The list of those over 18 years of age has already been sent to the government and they know how many vaccines to provide in the district. Since the vaccination requires two doses to be given, we are sending the vaccines to different levels after proper planning. The government has assured that more vaccines will be provided in the future, then we will be able to vaccinate more people at the same time by running some special drives as the Cachar district did.”