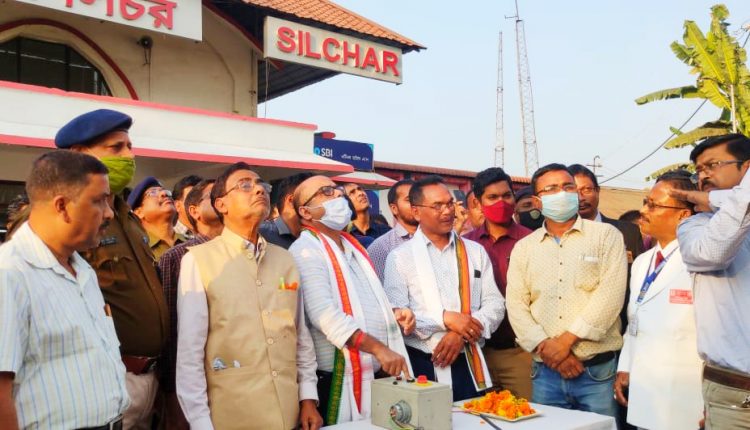 Just like other cities, a huge Indian national flag is flying proudly at the Silchar railway station. The tricolour mounted on the 100 feet tall pillar can be seen from almost every corner of the city. Besides, two lifts have been inaugurated at the two ends of the foot overbridge of Silchar railway station. On Tuesday afternoon, Silchar MP Rajdeep Roy himself introduced these, as well as gave several other assurances.

He started the event with Northeast Frontier Railway ADRM Suraj Jani, Senior DSO A. K. Singh, Station Super Biplab Das of Silchar among others. In their presence, the MP gave the assurance that within next December, a ‘Multi-cuisine Food court’ will be introduced at the Silchar Railway station. He also proposed to bring the Agartala-Delhi Rajdhani Express to Silchar rather than halting at Badarpur only. The matter has been discussed directly with the Railway Minister and the Railway Minister has assured that they will look into the matter.

A small event was organized at Silchar railway station at around 3 pm. Speaking on the occasion, MP Rajdeep Roy said, “The Silchar-Lumding broad gauge line was blocked for 18 years under the previous government. But within six months of our government forming, that issue was solved and now we have a place on the railway map of the country like any other developed city. Many trains have been cancelled due to the outbreak of the coronavirus last year and subsequent lockdown situations. Meanwhile, trains from Silchar to Guwahati and other cities in the country were cancelled. We have appealed to the Railway Minister to restart them as soon as possible. We have also appealed to provide more new trains for us. Especially, we have asked for a Rajdhani Express to go directly from Silchar to Delhi. At first, we wanted to bring the Rajdhani Express from Manipur to Silchar when it eventually commences. But for now, we have informed that the Rajdhani Express going from Agartala to Delhi should be brought to Silchar without stopping at Badarpur. So that it is possible to give the passengers from here an opportunity to travel directly to Delhi. Also, there has been a long-standing appeal for a large-scale food court at the Silchar railway station. According to the department, a multi-cuisine food court will be set up at Silchar railway station by next December.”

Later, MP Rajdeep Roy inaugurated two elevators at the feet of the overbridge of Silchar railway station. Other guests included senior BJP leader and APDCL director Nitya Bhushan Dey. From there the MP and other guests present there went near the Bhasha Shahid memorial statue to hoist a huge 100 metres high Tricolor flag with the help of a machine. It has started to be considered as one of the sightful spaces in the Cachar district. After such a big flag was unveiled, many people standing there took selfies while proudly uploading them on Facebook.