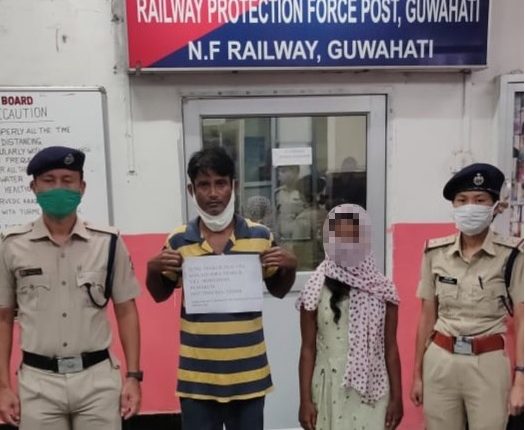 On 27.09.2020, at about 16.00 hrs, while constable / T. O. Singh of RPF Post, Guwahati was performing duty at the CCTV Control Room of Guwahati railway station, he noticed one male person entering into the station suspiciously along with one minor girl. Immediately, he informed the matter to on-duty constable, L. Ramananda Singh who was performing duty at the circulating area.

Constable / L. Ramananda Singh along with on-duty Chief Ticket Inspector / Guwahati detected them and found the minor girl with the person sitting in the concourse area of the station hiding their presence.

“During interrogation, their versions were found contradictory. The minor girl stated that she has fled away from her home to proceed to Chennai on being insisted by Sunil Thakur, who pretended to her as Rajib Gogoi and she had never physically met him earlier,” informed NF Railways through a media statement.

Inspector/RPF/Guwahati telephonically informed the matter to parents of the rescued girl and came to know that their daughter had been missing since 26.09.2020.

“It may be mentioned here that RPF has been successfully rescuing trafficked minors and fled away children from railway premises. In the year 2019, RPF/NFR rescued 854 minors from railway premises. During the current year 136 minors were rescued by RPF till last week. While last year 14 traffickers were apprehended, this year till now 12 traffickers could be apprehended by RPF/NFR,” Chanda added in his statement.