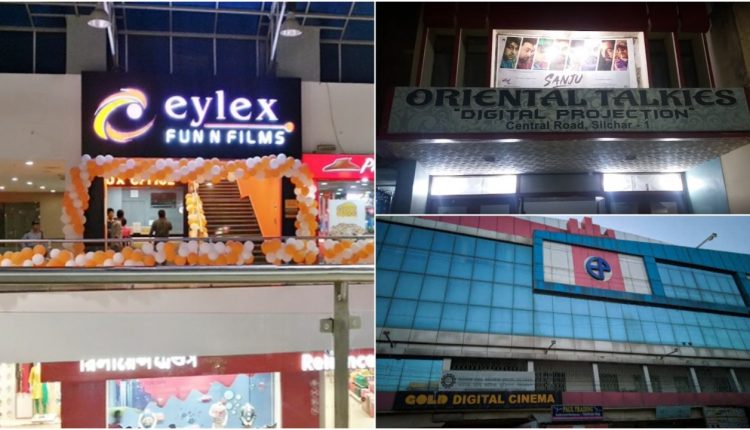 No big-budget films and lockdown, cinema halls in Silchar are financially hit

With most institutions closed down due amid rising cases of Covid positive cases in this second wave, the entertainment industry too has faced grave financial losses. The film industry which seemed to have only started to recover from the Herculean losses incurred during the first lockdown of last year has again hit the state of limbo. Theatres and cinema halls all across India have been kept close for the majority of the past year, thereby creating an acute livelihood crisis for theatre owners and their employees.

According to a report by The Mint, around 45% of India’s movie screens decided not to reopen even after the government permission came in early October last year. Meanwhile, the only two big-budget films that Bollywood have come up with during the pandemic, Akshay Kumar starrer ‘Laxmii’ (2020) and Salman Khan starrer ‘Radhe’ (2021), both were released on OTT platforms. As a result, the theatre owners didn’t get to reap any profit from those big releases. According to the Ficci-EY media and entertainment industry report 2020, India has a total of 9,527 movie screens, as of 2019, comprising 6,327 single screens and 3,200 multiplexes.

In Silchar too, all the theatres and multiplexes have been facing this acute crisis since the pandemic hit this country last March. Gold Digital Cinema, one of the leading theatres in the city, has had a considerable amount of success since it first stepped its foot here. But according to its Director Manish Kumar Baid, this total shutdown of theatres has even made survival hard for them. “We haven’t had any release since the first lockdown happened in March last year. Although for a brief time during the lockdown period, the govt did lift restrictions from theatres and multiplexes, but as there was no major release back then, the turnout was quite poor and within a few weeks, theatres were again asked to shut down by the govt. The government did help us for the first few months with various schemes but after that, no kind of financial help was received from any corner. Unlike many companies and institutions, we have kept all our employees throughout the pandemic and have even paid their wages from time to time. But with no income available due to theatres staying closed, this is turning out to be a huge blow to our financial backbone”, said Manish Baid of Gold Digital Cinema.

Eylex Cinemas, a two-screen multiplex situated at the Goldighi Municipality mall, is also facing this crisis. What’s even worse, with its doors staying shut for months, a few of its employees left their jobs in search of other sources of income, thus leaving them shorthanded. Santu Bhadra, Manager of the Silchar Eylex Cinemas, said, “We’re in a complete state of limbo for more than a year now. Yes, the government did allow us to reopen for a few months, but initially, only 30% to 50% of audiences were allowed inside the halls following Covid protocols. When all forms of restrictions were lifted allowing 100% audience at the beginning of 2021, it only lasted 20-25 days as Covid cases again started to pile up which prompted the govt. to shut theatres and multiplexes once again. With no major releases coming our way in this span of lockdown, our financial condition has been totally unstabilised. Also, due to this shutdown, we later realised that rats have infested a few spaces of our halls damaging seats and many other spots which also requires renovation. With no income coming our way and also having to pay our employees every month, how do we manage to handle such expenditure?”

Apart from multiplexes and franchise theatres, independently owned single-screen theatres have been the worst recipients of this crisis due to this lockdown. Oriental Talkies, situated at the heart of the Silchar city, is one of the oldest standing theatres of the region. With no corporate or financial backup, Oriental Talkies is battling this crisis due to lockdown all on their own. Shushobhan Sinha, the owner of Oriental Talkies, also spoke in a similar tone to his peers. He said, “Oriental Talkies has the pride of being one of the oldest cinema halls of this valley. People from all walks of life used to come here to watch popular commercial films. But since the pandemic hit us, our source of income has completely dried up and for the past year, we’re stuck in this situation. Now with theatres staying shut for so long, how do we pay wages to our employees? How do we feed ourselves? If the central or state government could perhaps support us during such a horrible time, maybe we can look up and stay optimistic, but until then I don’t see any way out.”

Although the owners and managers of the theatres are in a state of anxiety with the imposition of lockdown, are they worried that the rise of various OTT platforms would lead to any long term harm to the theatre business? To this, all of them opined that this current trend of audience preferring OTT platforms is just temporary and that the moment this restriction on theatres get lifted, the audience will gradually come back. “Of course with lockdown imposed and everything shut down, common people have nowhere to go, hence they end up watching content on the OTT platforms. But that won’t harm us in the long run, as the experience of the big screen is second to none, and most cinema lovers always prefer the theatre experience to watch on laptops or smartphones,” said Manish Kumar Baid of the Gold Digital Cinema.

Whereas Shushobhan Sinha of the Oriental Talkies said that OTT platforms can never produce profit as theatre does. “The only 2-3 big budgets films that were released during the pandemic were released on OTT platforms, but commercially speaking, even though the films became a huge hit, the revenue generated was really low compared to theatre releases. The reason behind it is simple, theatres charge everyone for each screening, whereas on OTT platforms, 5-6 people can watch the same film over & over again with the access of a single account. So it can never succeed and after the lockdown gets lifted and the situation gets normal, the audience will definitely come back to us, that’s what I believe”, said Shushobhan Sinha.