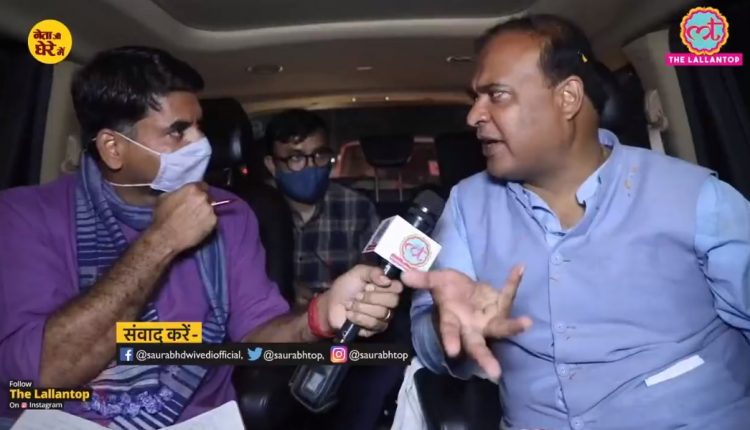 "No need to create panic by wearing masks, there is no COVID in Assam,"  Himanta Biswa Sarma

The man who is often credited for handling COVID induced pandemic the best among other states in the country has shared his views on the current situation which contradicts what experts are recommending. In an interview with Lallantop, Himanta Biswa Sarma said that there is no COVID in Assam.

The journalist questioned Sarma on why is flouting COVID guidelines by not wearing a mask. Sarma, health minister in Sarbananda Sonowal’s Assam Government, said, “There is no need to create panic by wearing masks, there is no COVID in Assam.”

It is worth mentioning here that the country is witnessing the biggest spike since mid-September 2020. According to NDTV, 93,249 fresh infections have been reported since yesterday, and the Ministry of Health and Family Welfare’s official number says there are 6,91,597 cases in the country. In fact, the Central Government of India has been urging citizens to follow the protocols, wear masks and maintain distance.

“Yes, the Central Government is urging the citizens but in the context of Assam it is not needed as there is no COVID in the state,” asserts Sarma. He adds a caveat, “It is a temporary relief that we have given to the residents of the state. When the cases surge and cross 100 a day, we will again issue an advisory and ask the people to wear the mask. It is as simple as that.”

There are critiques projecting a spike in the number of COVID cases after the general elections to Assam Assembly is over. And a primary reason for the same would be the gross negligence from the politicians. “They said the same before Bodoland Territorial Council elections. Did we witness a spike after the elections – No we did not. Even after the Assembly elections, there won’t be a spike. We will soon celebrate Bihu in grand scale…” Sarma adds.

He also says that this is the time to revive the economy. “If you wear masks, the parlour will have no use and they will lose money. Why disrupt the economy by inducing unnecessary fear. Assam’s economy is growing at a faster pace than the country’s economy and therefore, I don’t see any reason to wear masks and induce fear,” shares Sarma in the interaction with Lallantop. Watch the full video here.