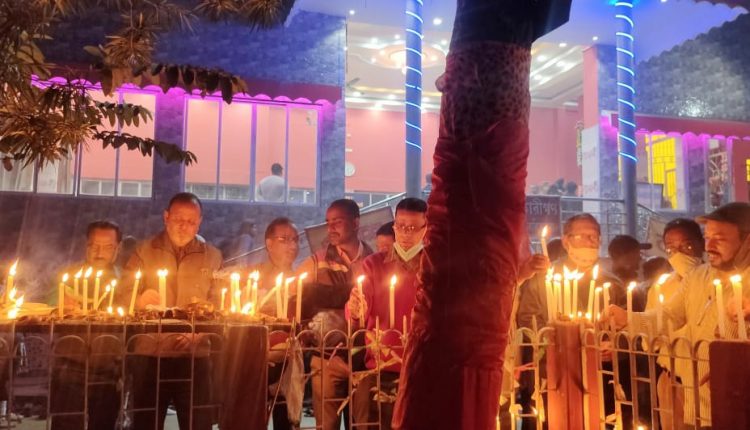 "No one in the Parliament Cries Over Our Deaths, Let the Government be Sensible" Paper Mill Workers in Religious Mourning Procession

The shutdown of the Cachar and Jagiroad Paper Mills under the Hindustan Paper Corporation has resulted in the deaths of 81 workers so far. The paper mill activists and the family members organized a ‘religious mourning procession’ in Silchar on Thursday afternoon in memory of the departed souls. Although at first, the police stopped them, then they eventually agreed to the procession without allowing candles. Even though the turnout was somewhat low on that day, it was done in a proper and orderly manner.

The procession was joined by the Joint Action Committee of Recognized Unions (JACRU) of Nagaon and Cachar Paper mills, HPC Paper Mills Revival Action Committee, family members of the paper mill workers and representatives of various social organizations. On behalf of the organizers, Manabendra Chakraborty, President of JACRU, said, “A candlelight procession was held on January 25 for the mourning of the deceased employees of the paper mills. However, the administration stopped the procession even after giving permission on the pretext of Republic Day and Corona situation. This time we set out again to complete the unfinished procession, by naming it ‘Religious Mourning Procession’. Since the shutdown of the two paper mills, 69 Hindu and 12 Muslim employees have died so far. Hence, on this day, the paper mill workers will seek peace for souls of the departed Hindus at the Kali Mandir at Silchar crematorium and departed Muslims at the Fazal Shah Mokam adjacent to College Road.

Also, they have expressed their concerns regarding the indifference shown by the state and the central governments in their promise of recovering the two paper mills. They said, “Recently, Prime Minister Narendra Modi wept bitterly in the Rajya Sabha on the occasion of the farewell of a Leader of the Opposition party. Whereas deaths of 81 employees of those two Paper Mills have never crossed his mind. Not only the Prime Minister but starting from the Chief Minister to the MPs and the MLAs, they never shed tears at our death. The people’s representatives do not care about how the family members of the employees are spending their days after the death of an employee. We prayed for their common sense at the Maa Shamshan Kali temple and Fazal Shah Mokam. ”

A hearing at the National Company Law Tribunal (NCLT) on the fate of the Cachar and Nagao paper mills was scheduled for February 8 but was later postponed to February 12. In other words, there is a possibility of a big decision to arrive regarding the recovery of the two paper mills tomorrow. Earlier, the NCLT had postponed their hearings 8 times. However, there has been a clear directive from the Delhi High Court recently that the hearing should not be postponed and the NCLT has come to a firm decision. However, no proposal has been put forward by the government to recover the two paper mills yet. On September 10th last year, the state government wrote a letter to the NCLT asking for two months of extension, but the government did not come up with a recovery plan even after six months.

According to the statement of the paper mill workers, it said “Recently, in a similar case, the Kerala government has taken on the responsibility of recovering paper mills in their area. The NCLT has even agreed to their government’s proposal. Similarly, if the Assam government could come up with a similar plan, the NCLT might agree to it. However, if there is no such possibility after tomorrow’s hearing, it will not take long to declare the two paper mills bankrupt. In that scenario, the NCLT could sell off the entire property.”