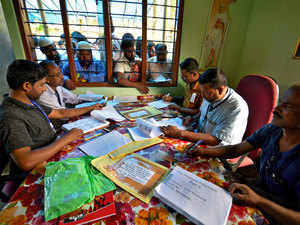 The Supreme Court on Tuesday declined the government’s plea to reopen the National Registrar of Citizen and conduct a sample re-verification of data collected, specially in border districts where influx rate is high. Court strictly held that there will be no reopening of the NRC exercise or re-verification of sample data.

“The entire NRC exercise having been performed on the aforesaid basis, the same cannot be now ordered to be reopened by initiation of a fresh exercise on certain other parameters that have been suggested on behalf of the intervenors/applicants on the strength of the provisions of Section 3(1)(a) of the Act.” a bench comprising of Chief Justice Ranjan Gogoi and justice RF Nariman said in an interim order.

The bench also directed that the security regime for the NRC data should be on same lines as that of Aadhaar information. “Insofar as the prayer of the learned State Coordinator with regard to maintenance of security of the NRC data is concerned, we direct that an appropriate regime be enacted on lines similar to the security regime provided for AADHAR data. Only thereafter, the list of inclusions and exclusions shall be made available to the State Government, Central Government and Registrar General of India.” the bench said.

The Court also directed for orders under illegal Migrants (Determination by Tribunal) Act should be challenged in the Guwahati High Court.

The court mentioned that only hard-copies of the supplementary list of inclusions be published at the NRC Seva Centers, Circle Offices and Offices of the District Magistrates of the State. “We direct that the list of exclusions to be published on 31st August, 2019 shall be published only on on-line and shall be family-wise.” the bench mentioned.

Last month, the Court extended the deadline for publication of the final version of National Register of Citizens (NRC) for Assam from July 31 to August 31.

Barak Valley man attempts to sacrifice himself on Eid, locals rescued him