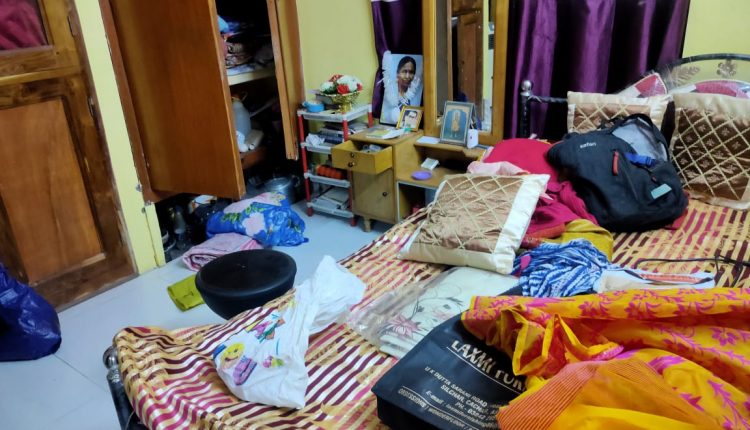 Since the advent of this puja season all kinds of anti social activities like theft, robbery and snatching have increased manifold. On the night of Kalipuja, a pre meditated robbery took place at Shamananda Lane in Kanakpur. The robbers took away gold worth rupees five lakhs and sixty thousand rupees in cash alongwith other valuable items. Such an incident has left many locals believing that a racket was involved behind the planned robbery.

Vivekananda College teacher Abhidip Roy Choudhury was the one whose house got robbed. His wife Maitreyi Mishra is a teacher of Aryan Junior College although they were not present home at the time of robbery.

Abhidip Roychowdhury was voluntarily working at Shamananda Ashram for Kali Puja when the robbery took place. He went to the ashram in the evening. Later his wife went to the ashram as well and from there she went to her father’s house. Taking advantage of the situation, the robbers entered from the backgate, broke the lock and ransacked the whole house. The couple got married last year only and some of their traditional family jewelery were kept at the house. The robbers smashed almost all the almirahs in the house with sharp weapons. Then they fled away with all the jewelery and money alongwith some other valuables as well.

According to family sources, the robbers took away items at least worth rupees five lakhs. Besides, all the places where cash was kept at the house were taken away.

When Abhidip came home at night after taking a break from ashram work, he saw that the lock of his house was broken. Astonished with what had happened he started screaming and called his friends and acquaintances. This is probably the first time in the area that a planned robbery of such a level took place and that too on Kali Puja night. The police came at night and did a primary investigation.

The Rangirkhari Police Officers said “The robbers kept an eye on the two occupants of the house and carried out the operation as planned when they were not at home. Thefts and robberies are taking place in all parts of the city almost every night. We are hoping that something will come out from the investigation based on which we can nab the culprits involved.”

House owner Abhidip Roy Choudhury’s father died two years ago and his mother died about six months ago. There were several valuables in the house associated with the memories of his mother and father. The couple is mentally broken now as everything has been taken away by the robbers. At one point the house owner started saying, “They should have taken money but left our valuables. These are not mere goods or items but memories associated with my father and mother.”

There have been several robberies in broad daylight in the city recently. In addition, the number of petty thefts is also much higher than ever before. In all such cases, the police visited the area but couldn’t recover anything or nab anyone. Such frequent thefts have raised an alarm among Silcharians with an inefficient police.