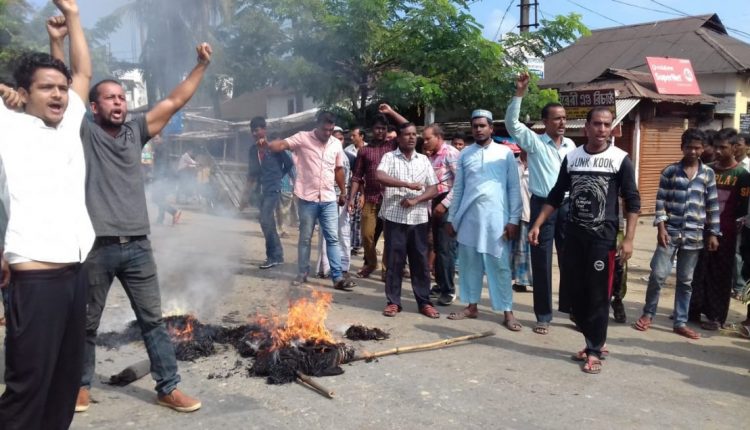 Only bandh cannot be the solution, it cannot get Bengalis security or respect, but hard work can

By Avijit Purkayastha On November 3, 2018 - 7:34 pm
Share
Five Bengalis were brutally murdered in Dhola, Tinsukia. They were murdered because they were Bengalis. It was openly announced by the surrendered ULFA spokespersons that they would repeat the massacres of ’83 in order to let Bengalis know their place in Assam. They or their followers got motivated and killed five innocent Bengalis. The number could have been more too. So, should we not protest such barbaric act. Of course, we should. But our protest should be effective and not just a waste of time and an extra holiday.

Bandh like today’s Barak Bandh has been happening since 1961. What has changed? Bengalis get temporary respite and then comes harassment programmes like the NRC. Today, the chief minister is busy with MSME programme and his daily routine. Finance minister Himanta Biswa Sarma is busy giving interviews. He is saying “It is just a militant activity and nothing else”. The banks in Guwahati serviced customers, the courts, schools and offices functioned as usual. Many slogans were raised all across Barak Valley but the sound did not even travel till Meghalaya, forget Guwahati and Delhi.

If these Bandhs could have helped Bengalis save their integrity, then the five would not have died. Barak Valley needs to understand that the Bandh and the provocative counter statement like, “This is not ’83 you cannot touch Bengalis.” is not the solution. Barak Valley and the Bengalis need to live up to their social responsibility.
How many Bengali civil servants – IAS, IPS, DC, SP do we have in Assam? How many Bengalis are there in the council of ministers? How many Bengalis are there in PWD, Irrigation and other state government departments?
Bengalis in Barak Valley need to understand that the community lacks representation and the community itself is responsible for that. The youth today wants to simply pass 12, and go away to a private engineering college somewhere in Chennai or Bangalore and then join a private company. The excellent ones want a seat in IIT and NIT or AIIMS. There is no national representation when it comes to sports, acting, singing or any other form of performing arts.
Who is the most followed Bengali in the world today? Sourav Ganguly? At least Forbes says so. Did he condemn the barbaric killing? No, he did not, and that is because he probably does not even know about it. Now, if Virat Kohli was a Bengali from Assam, then imagine the amount of attention this murder would have got. Sourav Ganguly himself would have condemned it. Imagine if Arnab Goswami, the editor of most watched English news channel was a Bengali from Silchar, the killing would have been a national story. Imagine if Ram Jethmalani or Harish Salve would have been lawyers hailing from Silchar, the Supreme Court would have been hearing the case. Imagine a Bengali from Silchar being the governor, chief minister, the prime minister or the president, and then ask yourself if anybody would have dared to touch a Bengali in Assam?
The youth of Barak Valley need to live up to their social responsibility, brightest minds need to think the secretariat and not silicon valley. Smart minds need to think public service and not Google, the opinionated ones should not waste time on Facebook instead should join politics. The political leaders should not think constituency instead should focus on Dispur. If an African – American Barack Obama can become the president of the United States of America, if a black man Nelson Mandela can liberate South Africa, if a Republican can fight against all odds within and outside, and pass a resolution abolishing slavery, if a Chaiwala can become a PM, then why cannot a Bengali from Silchar become the chief minister of Assam? Why can’t a young boy emerge as the next Sachin Tendulkar or Virat Kohli, why can’t a girl from Silchar spread melody like Lata Mangeshkar or Shreya Ghoshal, why cannot Bengalis become DCs and SPs, if Ranjan Gogoi or Hima Das can, then someone from Silchar too and once they do, Bengalis from Silchar will have integrity and no one would dare to call a Bengali, (Hindu or Muslim) a Bangladeshi. No one would dare to call the Bengalis termites.

Bengalis in Assam need leaders, need public faces, need prodigy, need entrepreneurs who would create an industry, need representatives in State, Centre, Bandh cannot get any, provocative responses cannot get any, hard work and determination can…

The opinion expressed in this article is the author’s personal opinion and not Barak Bulletin’s. You can share your article too, send it across at barakbulletin@gmail.com