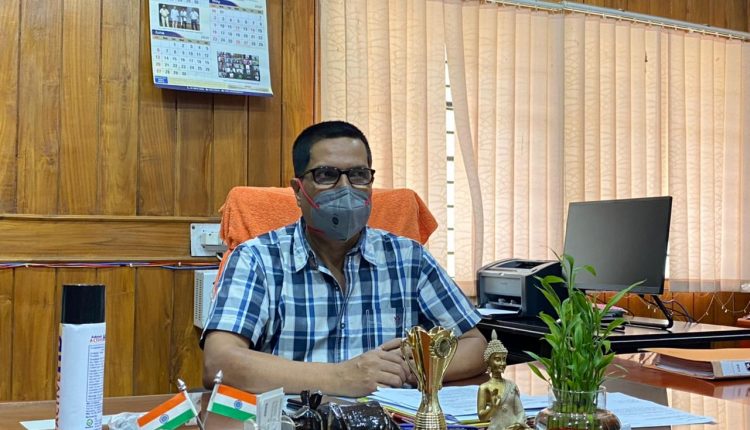 What is the point of going through all the hassles and getting vaccinated? Despite the catastrophe caused by the second wave of coronavirus-outbreak, the question remains in most households. “Whatever has to happen will happen anyway,” is what people say turning back to modern science. More so, after Baba Ramdev came out public with a set of questions for allopathic treatment and vaccination. So, is there a point in taking the jabs?

For a population of about 40 lakh people in Barak Valley, there is one hospital – Silchar Medical College and Hospital that has been treating symptomatic patients. Till May 25, 2021, in the second wave (From April 1, 2021) 1051 patients took admission to the COVID block of SMCH. 97 have died so far. Principal of Silchar Medical College and Hospital (SMCH), Dr. Babul Bezbaruah says, the doctors are observing a positive impact of the jabs.

Out of the 97 patients who died after testing positive for COVID19, seven were partially vaccinated while two were fully vaccinated. “The two who died after complete vaccination suffered cardiac arrest. Post-death tests performed revealed that their lungs were clean,” informs Dr. Bezbaruah. Moreover, one of the two patients who died after full vaccination had undergone a heart surgery and cardiac stents were used to treat blockages in his coronary arteries. He had suffered a cardiac arrest on the day of his death in the COVID ward of SMCH.

Out of the seven who died after partial vaccination, two had tested negative on RT-PCR. The remaining five had mild or no damage to the lungs. “We earmarked 50 patients, 26 partially vaccinated and 24 fully vaccinated. Then we observed them carefully and performed additional tests. What we observed is that the patients vaccinated have recovered fast. Even though they were infected, it did not take a fatal shape and their lungs had no or very little damage,” adds Dr. Babul Bezbaruah.

A total of 164 individuals took admission to Silchar Medical College and Hospital’s COVID block after vaccination. Out of the 164, 124 took single-dose while 36 individuals had to take admission after complete vaccination of two doses. Four patients did not have a proper record of vaccination.

“The vaccinated people are getting infected because the virus has changed its behaviour. It does not mean that the vaccines are not useful at all, as we saw, most patients have recovered with mild to moderate treatment if they were vaccinated,” says Dr. Babul Bezbaruah.

So, when a Baba Ramdev says, Doctorrrrrrrrrrrrrrr, and mocks, “Thousands of them are dying how will they save you?” it is clear that the learned man is trying to market his own Patanjali products. Patanjali, like Hindustan Unilever, P&G, Dabur, ITC is a fast moving consumer goods marketer that markets edible Oil, Dal, Rice, Soap, Shampoo, Facewash, Honey.

Patanjali launched something called a ‘Coronil’ kit which Baba Ramdev says works better than the allopathic medicines and thus he was mocking the allopathic doctors. It is exactly how Salman Khan says he flies after drinking ‘Thums Up’, in reality, neither does he “Tastes The Thunder” nor he flies. Similarly, Baba Ramdev’s mockery of allopathy is nothing more than an advertisement for his brand Coronil. How Colgate used to say, “Kya Aapke Toothpaste Mein Namak Hain,” Baba Ramdev is saying “Kya aapke doctors unke doston ko bacha paye?”

In Assam, 30,90,486 individuals got their first dose and 8,08,417 individuals have completed both doses. A total of 38,98,903 doses have been inoculated. India is administering 20 lakh doses a day and so far, more than 20 crore individuals have got at least one dose of vaccine. What the country needs more, according to epidemiologists, is faster vaccination which is wide-spread and covers rural areas too. All other products can sell simultaneously but not at the cost of modern science.

Currently, India is primarily using two jabs – Covishield and Covaxin for inoculating its billion-plus population and has administered 200 million doses since launching the world’s largest vaccination drive in mid-January. A third Russian-made vaccine Sputnik V has been approved by the government and is being used on a smaller scale at present.

More vaccine doses are required for reaching the threshold of herd immunity and the country may have to approve other foreign mRNA vaccines like Pfizer, Johnson and Johnson, Moderna and Novavax as well for reaching that milestone. Moreover ramping up the production capacity of home made vaccines is also crucial for a temporary alternative till more vaccines are available in the market.

Virologists term it as a race against the virus forming it’s new lethal variants due to antigenic drift and vaccines conferring protective immunity. Only the one with great perseverance will take over the other.

William A. Hasteline, an American scientist known for his groundbreaking work on HIV AIDS compared SARS-CoV-2 to the mythical Proteus in Homer’s Odyssey. Like Proteus, SARS-CoV-2 is the quintessential shape-shifter, able to alter its form whenever grasped. It is only through sheer persistence that Menelaus, the great hero, is able to wrestle and immobilise Proteus to a standstill.