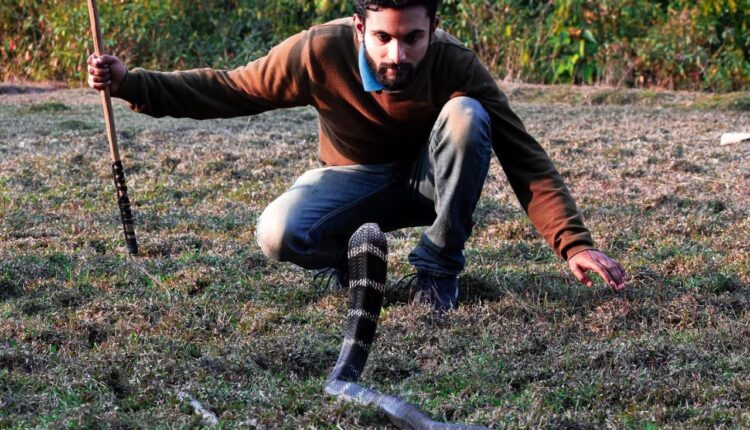 Slytherin, slimy and shiny are words that can not be put together as liked characteristics for everyone, but Trikal Chakraborty. This 25-year-old art student associates himself equally with colours and textures on paper and patterns and characteristics of serpents. Trikal’s upbringing has a big role to play in this which has made his snake rescue and recovery number in triple digits. Trikal grew up in the lap of nature, in the only hill station of Assam, Haflong. Even though he is a master’s student of Visual Arts, his daily activities also include snake and wildlife rescue. Today he is a field expert for the Forest Department of Cachar and is busy educating people about snakes and the Dos and Don’ts to deal with a snake. Trikal and his team of ecologist friends are just a call away to save you and your home from being occupied by snakes. But where did it all start and how did an artist make it into snake rescue? This post is all about it.

Trikal’s first interaction with a snake might be a shocker, he was just a kid in class 2 when he first touched a snake. It was his maternal uncle who made him do so and Trikal said was not at all sacred, rather he liked the touch. That was just the beginning of his fascination with snakes, it won’t be wrong to say that he has always been obsessed with snakes. Describing his childhood Trikal said, “I was never into cartoons or other TV shows except for Animal Planet. I liked the survival shows, where they showed how humans survive in extreme conditions or in deep jungles with the risk of being attacked by animals. I grew up in Dima Hasao and was always surrounded by jungles and wildlife which made these very relatable for me with these shows. Snakes, monkeys and such animals were nothing very surprising to me. Growing up, Steve Irwin and Austin Stevens were my idols and that made me interested in wildlife and documenting or photographing wildlife animals”. 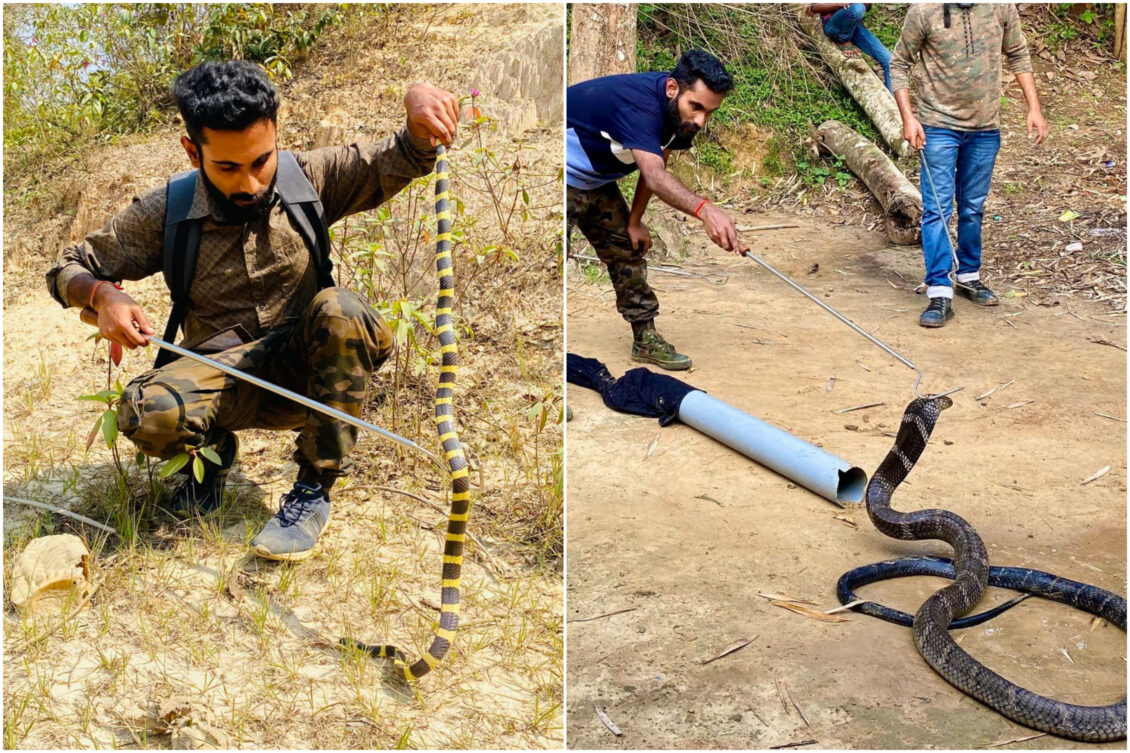 After his higher secondary board examination, he came to Silchar to continue his education further. Here he enrolled into Assam University for a bachelor’s degree in Visual Arts, but from the hills of Dima Hasao to a rented room on National Highway Road was a polar shift for the budding ecologist. In Silchar, he didn’t feel at home at first and he described his state of mind to be fighting for “ecological adjustment”. Even though he has always wanted to study design and visual arts, he was equally inclined towards herpetology and ecology so decided to continue learning on his own. Even though he continued to document wildlife whenever he got the chance, he didn’t feel at home here so easily.

2018 was a turning point in his life and one incident changed everything for the rest of his life. About this incident, Trikal said, “I started studying snake rescue and its features and characteristics when I was in the first year of higher secondary. But with all honesty, I never thought I will become a wildlife rescuer but it changed in the summer of 2018. I was in Haflong during the vacation and one afternoon my father asked whether I want to photograph a snake that was very rare in our locality. The snake has entered someone’s home in our neighbourhood and wouldn’t come out after long trials. My father had no idea that I was interested in rescuing the snakes otherwise he probably wouldn’t have asked me to go in the first place”. 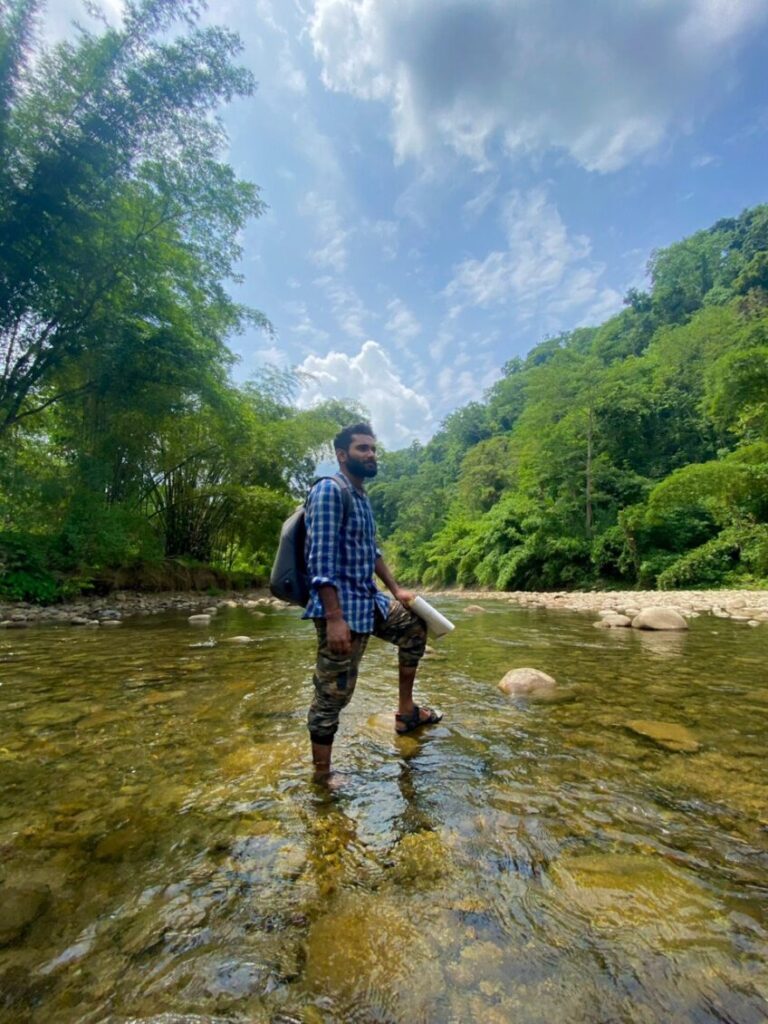 “I went there with my camera and for some reason, I was carrying an iron rod with me. The people there thought I came here to rescue the snake but initially, I had no such intentions. But anyways I entered the room where the snake was there and when I saw it, I could easily identify that it was a copperhead trinket snake. Even though it is a non-venomous snake, it is one of the most short-tempered. In the heat of the moment, I touched the snake with my iron pole and tried to remove it from there. Then I held it by its tail and somehow put it inside a bag. I had no idea how I did it and when I kept the camera aside. It all happened in just 13 seconds, there was no time for second thoughts. Later we released it into the forest when the snake calmed down”, he said further describing his first snake rescue. From that one incident, there was no turning back. From 2018 to 2020, Trikal recovered over 172 snakes in Dima Hasao alone and has become well known for his brave acts.

As they say, with great power comes great responsibility, Trikal’s record snake rescue was not easy to score. He said, “There were times when I had to go late at night and sometimes during thunderstorms and heavy rains. Some rescues take long hours, say 4 to 5 hours and it doesn’t matter if you are thirsty or hungry, the full attention goes towards the snake”. About his most difficult rescue, he said, “It was during my early days of rescue when I got a call from a neighbour in Dima Hasao. Accordingly, I went there and saw a huge crowd of nearly 150 people. That was my first disappointment for me as it can make the snake more dangerous in nature. After I asked the people where the snake was and also requested them to stand a bit far away, I went inside the house. It was a spectacled cobra and it was somewhere on the side of a bed. On the bed, there was an infant and no one was ready to come near the infant”. 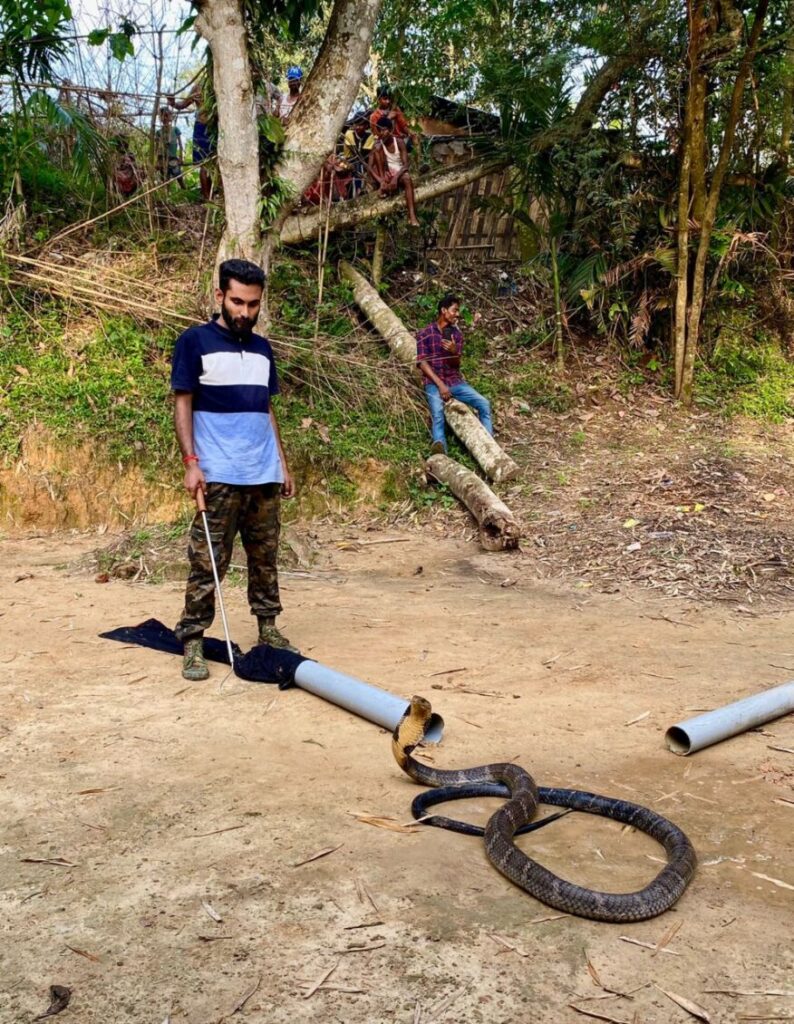 The situation was intense as now a human life was also involved in this and one second of distraction or one wrong step could be dangerous for the children. Trikal had to take a call there and he did take the best call, “I thought a lot and made many projections in my head. I first grabbed the baby and rescued him outside that room. I checked the foot and leg to ensure there were no snake bites. Luckily he was safe. Then I went for the snake. As it was just my beginner stage, I didn’t have much hands-on cobra rescue experience. Somehow, I pushed it inside a sack with the help of a pipe and later released it in the jungle. That whole exercise took five hours and I could feel every second of that”. About another dangerous save made, he said was in Dargakona in Cachar where he rescued a king cobra. It was a 9.5-foot-long snake and took him seven hours without any sign of progress. Out of exhaustion, he had to call for help and later he along with his friend and another rescuer, Bishal Sonar, rescued the “king” to safety.

So far Trikal has rescued over 255 snakes out of which 13 were king cobras and 20 Burmese pythons, but for him, the most dangerous was a greater black krait that he rescued in Dima Hasao. Even though this artist-turned-snake rescuer never had any institutional training in snake rescue, most of his training was traditional and acquired by helping people in the field at first. Trikal said, “I learnt from the best, Sumit Nath and Biswajit Singha were my mentors and they taught me everything about ethical snake rescue. Whatever I have learnt is from them and for them. If I have to thank someone else, then that would be Cachar Forest Division. If today we are doing this professionally, it is because of the Forest Division. They have always supported me and the team I am a part of. Our number has spread to every village in Cachar and be it the police or the Forest Office, if there is a snake, we will be there to rescue”. Trikal today is a Field Expert of the Cachar Forest Division and the 25-year-old wildlife conservator is balancing between rescuing snakes and painting canvases.