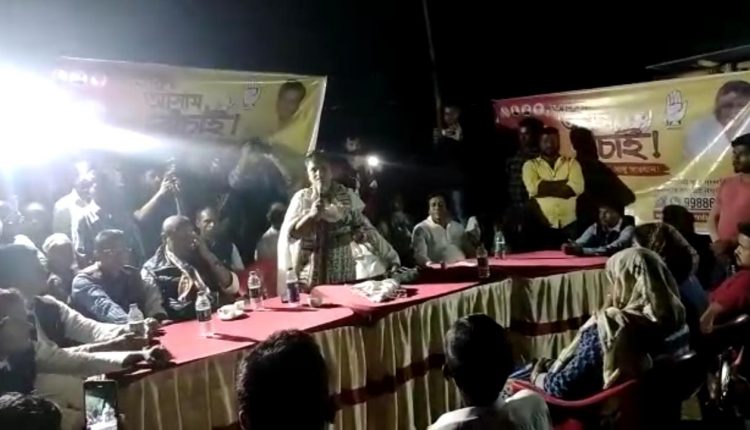 ‘Assam Bachao’ is Congress’ landmark campaign through which the party intends to register a comeback in the state. Today, the campaigners were at the Borkhola Constituency and more than ‘Assam Bachao’, it was save the unity in the party.

When the party’s senior leaders reached the spot, the supporters started raising several slogans. A group raised “Papon Dev’ Zindabad slogan and sparked an outrage among the Congress workers.

Papon Dev has submitted his willingness to contest on a Congress Ticket from Borkhola and Papon Deb Zindabad slogans today was a step ahead from his supporters. But the local Congress workers did not like it.

The two parties within Congress started raising counter slogans and the situation got tensed. “Papon Deb is an outsider in Borkhola and he has travelled his supporters to raise slogans. This won’t be tolerated in Congress,” said the locals and started agitating.

The Congress leadership intervened and brought the situation under control. At one stage, it looked like a brawl is about to break within the party.

Former MP Sushmita Dev, who was present on the spot addressed the issue during her speech. “Anybody can show eagerness to contest an election on party’s ticket but the party will shortlist the candidate after discussing with the block level workers and units,” she assured.

The Mahila Congress president said that the party respects its units and none will be ignored. Touting Borkhola as the “bastion of Congress” Dev said that she along with the leadership in Delhi are optimistic the party will secure victory in the constituency.