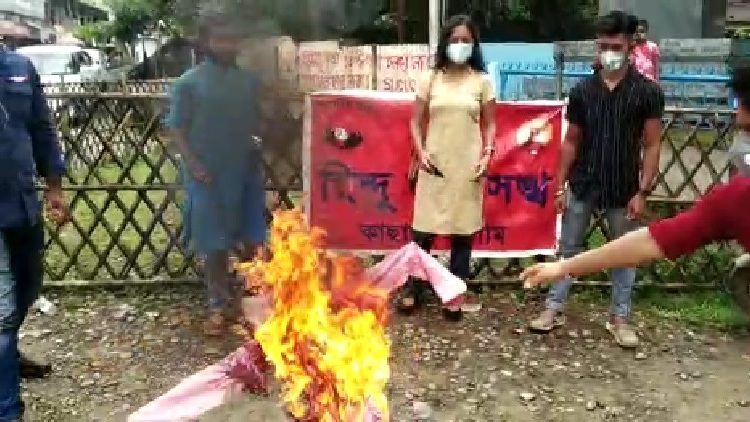 Members of the Hindu Chatra Sangha gathered near the foothills of Khudiram Bose’s statue in Silchar earlier today to protest against the ULFA(I)’s call to ban Durga Puja.

It is worth mentioning here that on September 4, 2020, United Liberation Front of Assam (I) had issued a press statement urging the state government to prohibit Durga Puja.

Today, the Hindu Chatra Sangha members were protesting against that call for ban. “ULFA is an antisocial, terrorist organisation. We urge the government to not take them or their demand seriously. By calling for a prohibition of Durga Puja in Assam, ULFA has exposed its anti-Hindu agenda,” said Subhashish Choudhury from the Hindu Chatra Sangha.

He added, “We condemn the act. ULFA leader Paresh Baruah should refrain from issuing such statements.”

The collegegoers raised “ULFA Murdabad ” slogans and then burned an effigy of Paresh Baruah.

ULFA (I) has been making anti-Bengali statements since the Joint Parliamentary Committee visited Assam to survey the need for Citizenship Amendment Bill in March 2018. Later that year, on November 1, 2018, five Bengalis were massacred because of their ethnic roots in Dhola, Tinsukia.

ULFA (I) was heavily linked with the barbaric killing of innocent residents of the state. The NIA had even filed a chargesheet against two ULFA (I) terrorists.

With Durga Puja around the corner, many suspect that ULFA might start peddling anti-Bengali and antisocial narratives again.