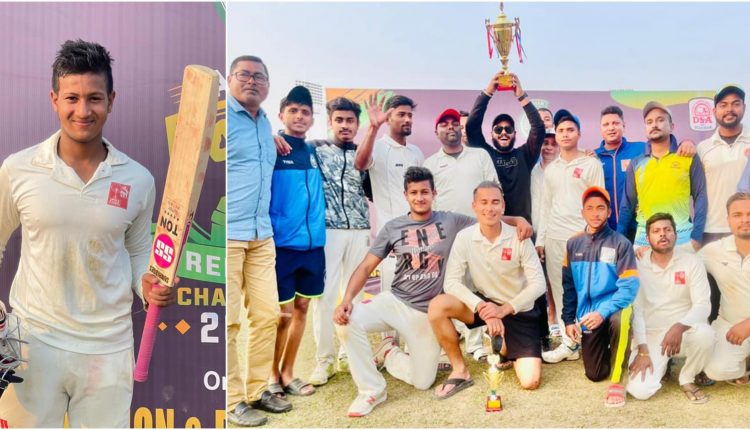 India Club had faced a major blow in the Super Division championship that concluded last month. In the Semi-Finals, they were outplayed by United Club who went on to win the trophy. In the Assam Cricket Association’s Assam Premier Club Championship – Silchar Chapter, the India Club has proved again that they are a club of champions after winning the title for the third consecutive time.

In the final on Thursday at Satindra Mohan Dev Memorial Stadium, India Club’s captain Raihan Jomeel Mazumdar won the toss and opted to field first. Underdogs who defeated favorite Town Club to reach the final, Yogayog Sangha had the worst possible start. In-form opener, who has scored a century in the tournament – Joydeep Singh returned to the pavilion without opening his account. Another opener, Debangshu Sarma played a poor shot while batting at 8 and got dismissed.

The pillar of Yogayog’s middle order, Roshan Topno clicked again. Batting at number three, he scored 61 runs of 83 balls and anchored the innings. Gaurav Topno (27) did get a start but was slow all throughout and could not make the most of the slog overs. Sagar Chetri (19) and Priyankar Chakraborty (14) also batted with a poor strike rate. The innings that took Yogayog Sangha to a respectable total came from the bat of Bikiran Das. With the help of 6 boundaries and one six, he scored 44 runs of just 23 balls to set a target of 199 for India Club to win in 40 overs.

Amarjyoti Kalita picked four wickets and was the top bowler for India Club, while Chandradip Das got three. Both of them bowled economically and kept the pressure building. Sadek Imran Choudhury and Rupak Darjee picked one wicket each.

India Club needed a good start and they got a great one. 107 runs partnership between openers Parvej Musaraf and Govinda Rajbangshi took the match away from Yogayog Sangha. Parvej remained not out for 109 and took the team off the line. He took the responsibility and played a sensible innings by taking limited risks. Though he scored 16 fours there were no sixes in his innings shows the temperament he batted with. Govinda Rajbangshi (45) was dismissed by Sagar Chetri and the under-16 Silchar team’s star batsman Prashant Kumar continued his poor run of form. He got dismissed for 15 runs which he scored by playing 34 balls.

Captain Raihan Jomeel Mazumdar (1) missed out, however, Sadek Imran (19) and Parvez Musaraf chased the target in 38.4 overs securing the seven-wicket win. Parvez Musaraf was adjudged as the man of the match for his century under pressure.