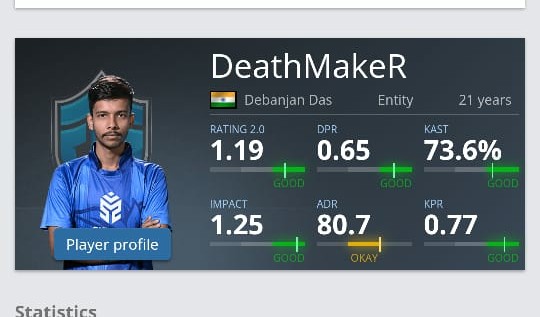 You can call him the man with fast-fingers and extremely good hand-eye-coordination. One of the hottest names and a nightmare for Indian Counter-Strike Gamers, ‘Deathmaker’ aka Silchar’s Debanjan Chakraborty is just unstoppable. In the recently concluded, ESL India Fall Premiership Season, tier-I clan, Orgless5 which was earlier know as Signify has lifted the trophy yet another time.

For the ones new to gaming, ESL formerly known as Electronic Sports League is a Germany based gaming organisation. In fact, it is the largest and oldest E-Sports company in the world. CSGO (Counter Strike Global Offensive) is a competitive shooting game where two teams (clans) take on each other and the one with the maximum wins in the given period of play wins the match.

In the Summer season too, it was the same clan with a different rooster that went on to win the prestigious title. One of the key members of Orgless5 is Silchar’s Debanjan Das. Son of an Assam University employee, Debanjan started playing counter strike in 2009 at various gaming parlours in Silchar. In 2016, he first registered himself Online and started competing with players from India and all around the world. Like in every other middle-class family, Debanjan’s parents too were skeptical about their son leaving academics to pursue something which is at best a ‘video game’. Well, he proved it is not just a ‘video game’ but a ‘sport’ played globally. He is proud of the decisions he made and is now training hard to make a name for himself in the global circuit.

While ‘Deathmaker’ is key in each and every tournament he plays, in the Fall Season of ESL he had to take larger responsibility. IGL (In-Game Leader) of Orgless5 ‘Yb’ had to opt-out of the tournament and he was replaced by ‘Huntrr’ which was a big upset. However, ‘Huntrr’ coped well in the new team and Orgless5 went on to win the tournament with which came a trophy and cheque of Rs 5,25,000.

In the final, Orgless5 was pitted against ‘Global E-sports’. The latter selected ‘The Train’ as the veto map while Orgless5 went on with their favourite Dust2 and Inferno was kept as a tie-breaker. Orgless5 went on to win the ‘The Train’ map by 16 – 10 and there was no stopping them in Dust 2. The clan crowned the title 2 – 0.

Silchar resident Joy Banik has allegedly jumped off from Sadarghat Bridge; Search operation is on