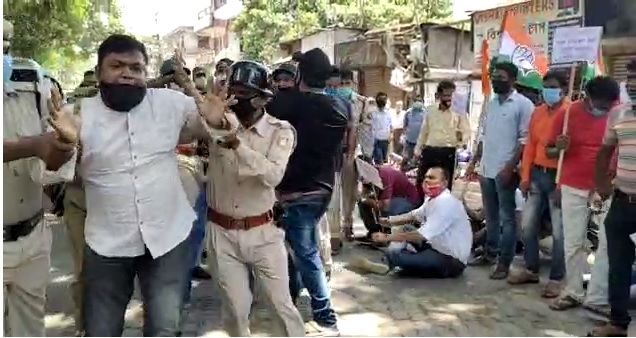 Today former Silchar MP, Sushmita Dev along with other senior Congress leaders staged a protest in Silchar against the rising price of petrol and diesel. Before the protest could kick-off, Police officials intervened and said it won’t be allowed.

“Police officials seized our microphones and started detaining our workers,” said Sushmita Dev. “We said if your concern is social distancing, we assure we will follow the guidelines to the T. Yet, the police officials kept saying you are not allowed to protest,” She added.

As per the information handed over by the Cachar Congress Office, District general secretaries Abhijit Paul, Papon Deb, Anupam Paul, Rajesh Deb, Kushal Dutta were among those detained by the Police. “We went to the DC a couple of days back asking for permission to organise a march while maintaining social distancing norms, we were denied by the office of the deputy commissioner. However, we have seen so many BJP gatherings in Barak Valley and all throughout the state, why isn’t Police taking action against them and only denying us,” Dev questioned.

Congress workers have been holding protests all over the country, “It is only in Assam where we face this wrath from Police,” alleged Dev. She said they will continue protesting as this is a decision takes by the AICC.

She said recently the chief minister of Assam Sarbananda Sonowal visited Silchar, BJP leaders were seen at various event but Police took no action against them. “How can the law of the land be different for Congress and BJP? Are we targetted because we are gathering to protest against the government?” the national president of Mahila Congress questioned.

Sushmita Dev added that the district Congress will seek permission once again and if they are denied it will be “doodh ka dooh aur paani ka paani”. She concluded, “It is clear that the government is using Corona as a weapon to silence the opposition.”