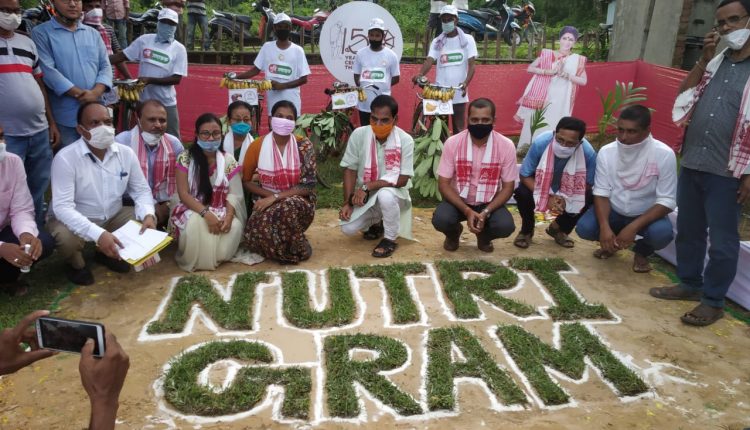 As part of closing ceremony of Poshan Maah, a valedictory programme was held at 652 number Hatimara LP School at Dinonathpur Bagicha under Kalain Block on Wednesday.

It is pertinent to mention that Dinonathpur village has been declared as pusti-gram (nutri-village) and has adopted nutri-garden in 140 households through MGNREGA convergence.

In the programme saplings of vegetables were ceremonially distributed to 10 numbers of beneficiaries.

Jain and Jalli launched pusti sahayak who will monitor the health status of each household of Dinonathpur village along with toll free number 24×7 for bringing any problem to the notice of the district administration for solution. They will also contact the nearest PHC and Anganwadi centre for redressal of problems.

MLA, Jain and Deputy Commissioner Jalli unveiled the model of a nutri-garden. Height and weight of SAM children were also measured in the programme.

Addressing the gathering, Deputy Commissioner, Jalli said, “We are focusing on Dinonathpur village to make it an ideal village (adarsh gram). We will provide electricity, water, banking facility, gas connection and other basic services to the residents of the village. We are working to make the entire country free from malnutrition through Poshan Maah being observed in the month of September.”

She said the challenge in making India kuposhan-mukt has been taken up with the aim of reducing the number of SAM children. She also spoke about the importance of nutrition in every 0-5 years child for normal growth and mental development.

Emphasising on the role of Anganwadi workers, Jalli said, “They are conducting screening of children to check whether they are malnourished.”

Speaking on the occasion, MLA Katigorah, Amarchand Jain said on 8th March, 2018, Poshan Abhiyaan was ceremonially launched in Jhunjhunu district of Rajasthan. He said Rs.5 crore has been sanctioned for the development of Dinonathpur village and the amount will be utilised in the next five years. He also said under the Adarsh ​​Gram Yojana, the village will be developed as an ideal village so that it becomes an example to other villages. ‘It is the responsibility of every villager to make it a developed village’, he quipped. Jain also suggested the womenfolk of the village for organising a guardian meet on a monthly basis and discuss about their problems and ways to mitigate them.

President, Zilla Parishad, Amitabh Rai said that Dinonathpur Bagicha has been taken as an ideal village under the Adarsh ​​Gram Yojana and the government has earmarked Rs.5 crore for the project out of which Rs.50 lakh has been already sanctioned as first installment. He mentioned that Rs.10 lakh has been allocated for construction of main entrance to the village; Rs.10 lakh for construction of a community hall and Rs.30 lakh for installation of 60 numbers of solar lights.

During Poshan Maah under adarsh village Dinonathpur Bagicha, Gorerbitor Gaon Panchayat under Kalain development block witnessed the selection of 140 beneficiaries for providing them with IBS for setting up nutri garden to each beneficiary with cost involving Rs.20,370. Under this amount, Rs.14,523 will be provided against wages and rest of the amount for fencing work, etc as material costs.

Provisions have been made for green house from where the process of distribution of saplings to beneficiaries will begin. Out of 140 beneficiaries, 10 were provided with saplings for setting up nutri gardens by the DC, Cachar and MLA, Katigorah.