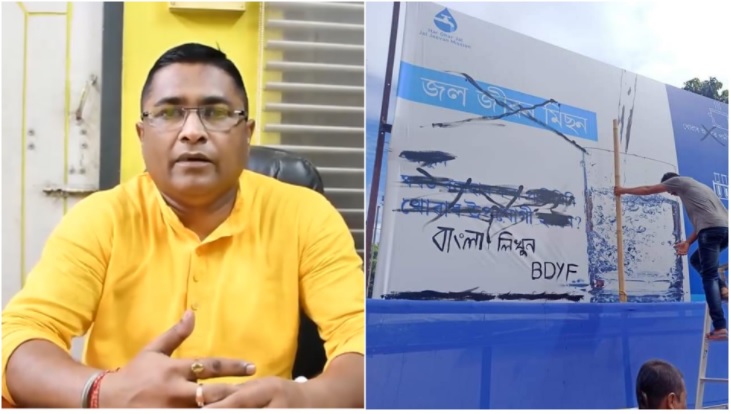 The blackening of Assamese language in government posters in Cachar as a mark of protest has garnered strong criticism. Barak Democratic Front’s youth unit defaced posters at Silchar Railway Station and other spots in Silchar. Their demand is that while Bengali is the official language of Barak Valley, why government advertisements are published in the Assamese language, ignoring Bengali.

Silchar MLA, Dipayan Chakraborty has condemned the act of defacing posters and blackening Assamese language. Speaking with Barak Bulletin, he said, “The ones defacing Assamese posters are anti-nationals.”

The MLA added, “Barak Valley is a peaceful place and Assam Govt. has been paying special attention to Barak since 2016, be it the current Chief Minister or former Chief Minister. We saw the Chief Minister taking part in Puja celebrations in Barak Valley this year as well as last year too during Saptami. There is a new wave of development in Silchar and Cachar. Some fringe elements can’t withstand that and are trying to foment hatred.”

Barak Democratic Front is a body founded by Pradip Dutta Roy – a renowned personality also the founding president of All Cachar Hailakandi Karimganj Students’ Association (ACKSHA). Silchar MLA Dipayan Chakraborty suspects former MLA Dilip Paul’s hand in it attempting to create an abominable environment. “It is well known that Dilip Paul is a close aide of Pradip Dutta Roy and during the elections to Assembly, Paul used Pradip Dutta Roy to peddle misinformation. Also, many rebels who left BJP to join Dilip Paul in his election campaign, were also spotted among those defacing the posters,” said Chakraborty.

“Immediate and exemplary action should be taken against them,” he asserted. The BDF’s youth wing, while protesting at the Railway Station, took a jibe at Dipayan Chakraborty. “The MLA’s residence is just a stone-throw distance away, what is he doing when government advertisements are published in Assamese and stuck at Silchar Railway Station where eleven martyrs laid their lives to secure Bengali as the official language of Barak Valley (then Cachar),” said a protesting BDF member.

“I don’t think this incident should be evoked and juxtaposed with 19th May because Bhasa Sahid Divas isn’t against the Assamese community or any other community as a matter,” responded Chakraborty.