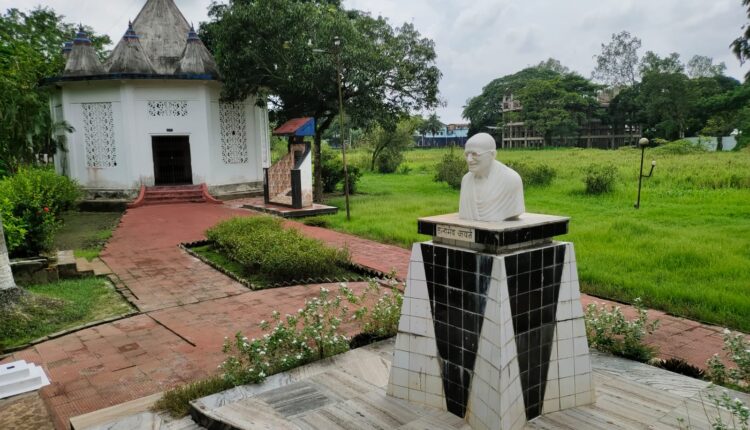 It is a very well-known fact that Mahatma Gandhi, the father of our nation visited Barak Valley and addressed a huge gathering from a stage, right in the middle of Fatak Bazar. Mahatma Gandhi came from Lumding via train, first to Badarpur where he addressed a gathering at the Badarpur Station and then reached Silchar late at night, at around 10 PM. Other than volunteers of the Swadeshi Movement, he was also accompanied by Maulana Mohammad Ali. Other than Fatak Bazar, Gandhi also visited some other places and left his imprint all over the valley. His visit has brought a lot of changes here and especially the Women’s Movement started with his arrival here in Silchar. Gandhi basically came here to spread the message of Civil Disobedience, which was linked with the Khilafat Movement as well.

The year was 1921, August 28 when Mahatma Gandhi’s train reached Silchar at 10 PM, a huge crowd of people went to the station to welcome him. On the way from Badarpur, there was huge crowd at every station, even late at night, to greet the Mahatma. After being welcomed at Silchar, he went to the residence of Kamini Kumar Chanda in Goalapatty (now Ukilpatty). He was also accompanied by, Maulana Muhammad Ali, his wife Begum Mohammad Ali, Seth Jamunalal Bajaj, Maulana Azad Sobhani and Krishna Das, who later wrote the book, “Seven Months With Mahatma Gandhi”, published in 1932. It is for this book that we have concrete written records of his arrival and activities in Silchar. A huge crowd of thousands had gathered in front of the Chanda Bhawan as well.

On the day of Mahatma Gandhi’s arrival, Kamini Kumar Chanda was not in Silchar, he had gone to Chattagram for a case. It is worth mentioning here that Kaminikumar Chanda was a well-established lawyer of that time. In his absence, Arun Kumar Chanda, the eldest son of Kaminikumar felicitated and welcomed him to their residence. AK Chanda was just 22 year old then. The next day was again another huge crowd at Chanda Bhawan, people were so excited to see Mahatma Gandhi that volunteers had to engage and encircle the bhawan so that there is no untoward incident. Debabrata Dutta, has written an article about his, now published as “দেবব্রত দত্তের নির্বাচিত প্রবন্ধ সংকলন (বাংলা ও ইংরেজি)”. Debabrata Dutta wrote, it was such a huge crowd of people from all sections of society, a stampede by the visitors has destroyed the rose garden of Chanda Bhawan. A large number of tea garden labourers had also come to see Gandhi. Not just labourers from the tea garden, a few officials (saheb) from the tea gardens also had come to see Mahatma, but since they were not allowed to visit him directly, they had to be creative. Dutta wrote, the sahebs had to first enter the house of Raibahadur Hemchandra Dutta, a neighbour of the Chandas and through their house, they went to visit Gandhi. 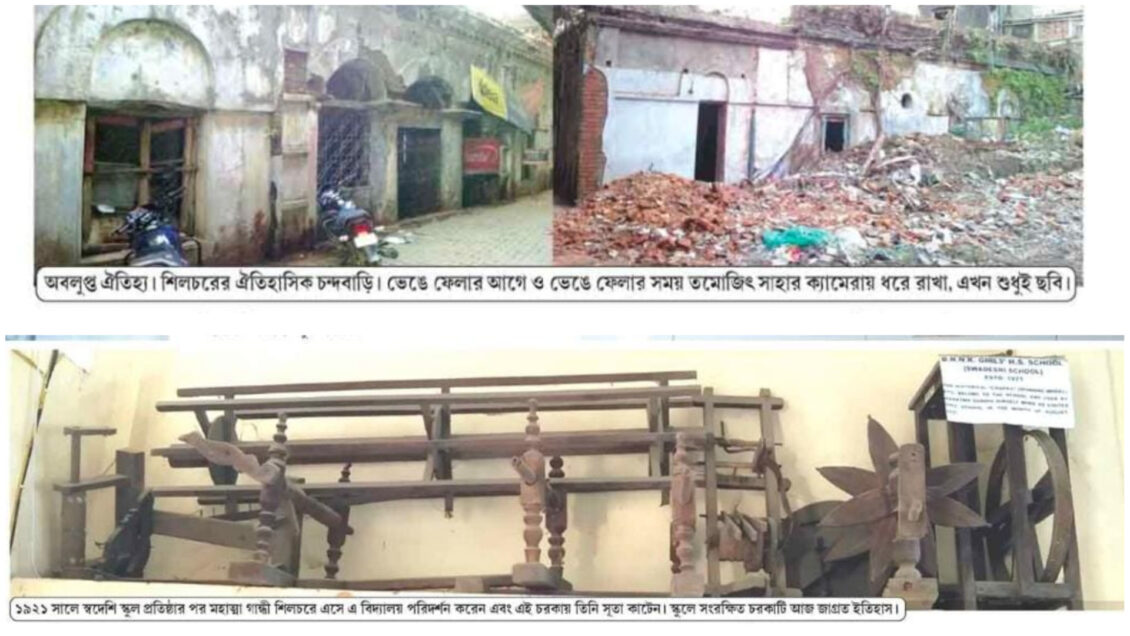 Gandhiji didn’t have a long list of programmes at Silchar, after finishing visits and daily chores at the Chanda Bhawan, he went to Fatak Bazar, where he was supposed to address a sabha. Debabrata Dutta wrote, the Sabha started at 3 in the afternoon, but Gandhi’s speech was in Hindi but it didn’t have any emotions or excitement. Rather, Mohammad Ali’s speech moved people when he said, the clothes worn by Hindu are made of cow’s skin and Muslim’s with pig skin. This made people tear the clothes they were wearing and burnt them during the sabha itself. 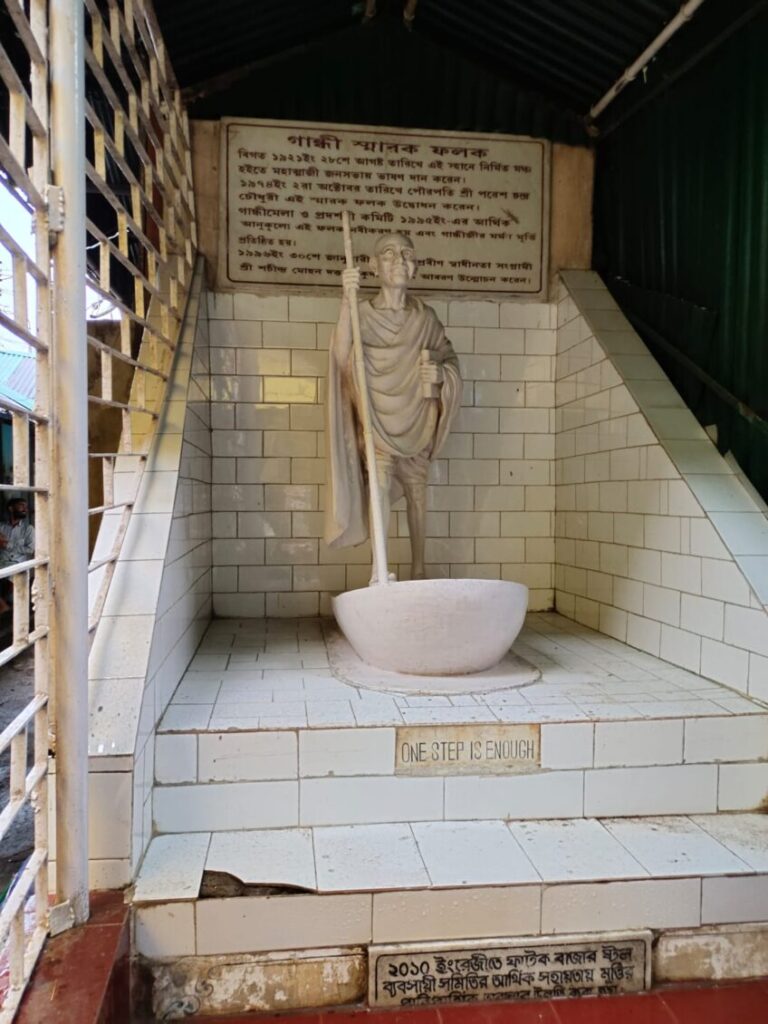 Kaliprasanna Bhattacharjee, also wrote about Gandhi’s speech his book, “শিলচরের কড়চা. He was not very old then to understand everything and had gone with his father to the Sabha. He sat on the stage, as his father was a well respected citizen of the town. He wrote, the stage was made quite higher and from the stage he could see thousands of people gathered to hear Gandhi speak. Most of the people there were wearing white caps and Gandhi was accompanied here by Kaminikumar Chanda. Gandhi wore a white dhoti and a long kameez. It was drizzling the entire day, but everyone waited with patience for Gandhi’s arrival. The meeting started with Kaminikumar Chanda’s speech. The place where the meeting was held is still kept preserved by the Silchar Municipality, even though it is difficult to find it within the narrow lanes of Fatak Bazar, but there is a white statue built in this memory. 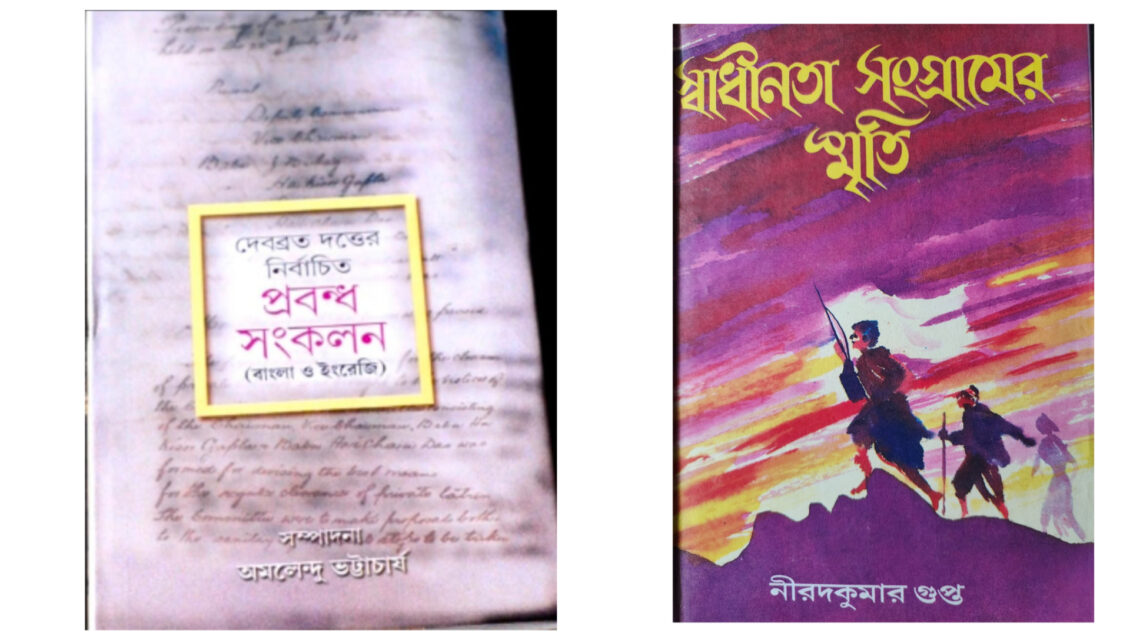 After his address at Fatak Bazar, he went straight to National School which was also known as Swadeshi School and presently DNNK Girls High School. Here he sat in the veranda and span the Charkha for some time. The charkha is still there inside the school. Later he returned to Chanda Bhawan to say final goodbye to Silchar and returned with his accomplices for his next place.

Mahatma Gandhi’s visit has definitely woken the spirits of nationalism among the masses of Silchar. The message of Swadeshi was also well received. What was unique was the beginning of the women’s movement. Until then, women were not allowed to participate in any rally, procession or demonstration. The first time when women participated in any such movement was during Bipin Chandra Pal’s Silchar visit in 1906. Then the women of Silchar were very eager to listen to his speech, but since their parents were very conservative, they couldn’t allow their open participation. A special arrangement was made at the residence of Mahesh Chandra Dutta at Ukilpatty. His house had a central courtyard with verandas on all sides. The verandas were covered with bamboo curtains and Bipin Chandra Pal stood in the middle of the courtyard and spoke in the all women sabha there. This kind of restriction was very normal at that time.

The restriction only broke when Mahatma Gandhi visited Silchar. When Gandhi came to Silchar, women for the first time were in the open streets to visit a man, the Mahatma. This change came for one reason, Gandhi dressed very plainly like that of a saint or sadhu, his dressing was also responsible for gathering huge respect from the society. Gandhi was seen almost next to a God and this has been mentioned in Nirod Kumar Gupta’s book “স্বাধীনতা সংগ্রামের স্মৃতি”. Here he wrote, when Gandhi was returning from Srihatta (now Sylhet) on a boat, a woman came on another boat near him and started to shower flower petals on him, like people did to their God’s. A magazine published from Silchar in 1940 named “বিজয়িনী”, was the first women’s magazine from Silchar and the name was given by Rabindranath Tagore. This magazine published how Gandhi’s visit to Silchar changed the environment of the women’s movement.

Other than the written records, the impact of Gandhi’s visit can be found from the folk songs of that period. Professor and Researcher Amalendu Bhattacharjee says, “During the freedom movement many folk songs were composed from here and it is noticeable that songs were made only on Gandhi. A popular dhamail song from that time is ‘গান্ধী বড়ো লুক গো সখি, গান্ধী বড়ো লুক গো সখি | গান্ধী রাজায় দিসে জল ভরিতে সুখ |’. Most of these songs were sung by the womenfolk and respect of women for Gandhi can not be ignored. Just like Gandhi ji’s visit impacted the freedom movement of the valley, it has equally played a role in the women empowerment and the women’s movement of the valley.”