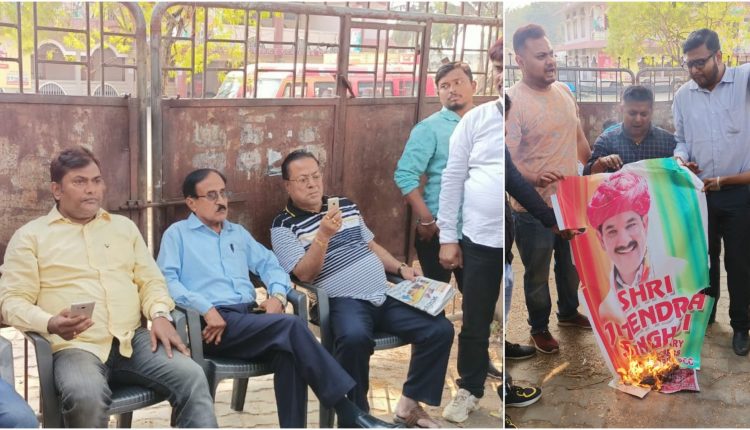 Congress-AIUDF alliance has now started to irk the loyalists of both parties. After the news of Sushmita Dev tendering her resignation broke, the Congress workers in Barak Valley started protesting.

In front of Congress Bhawan in Silchar, Congress leaders along with the NSUI and Youth Congress members gathered and launched a protest. They alleged that the party’s in-charge for Assam, AICC Secretary, Jitendra Singh has “Sold the party to AIUDF.”

According to them, Singh is playing the mastermind in seat sharing and giving away key constituencies like Sonai and Katigorah. “We will resign in a massive number if Sushmita Dev’s resignation is accepted,” said protesting NSUI members.

The protestors tore apart posters of Jitendra Singh and later set them ablaze. They went to say that it is on Jitendra Singh’s behest, the party has snubbed loyal workers and is handing over tickets to expelled individuals like Dr. Rumi Nath.

“Why should she, who was after the BJP ticket, contest from Borkhola. Don’t we have a candidate to field in Borkhola?” they questioned.

Similar protests broke in Sonai constituency too. The party workers have come to know that Congress won’t field a candidate in Sonai and it is AIUDF that will. This has irked them as they have been working in Sonai for years. A similar decision has been taken for Katigorah too, where the party has decided against fielding a candidate leaving it for AIUDF to contest.

The issue is not only related to the seat-sharing. According to the protestors, Congress’ Barak Valley leadership has not been heard while shortlisting candidates as well.

“We will lock the Congress Bhawan and tender mass resignation if the party’s leadership does not go for immediate course correction,” said the protesting Congress workers.