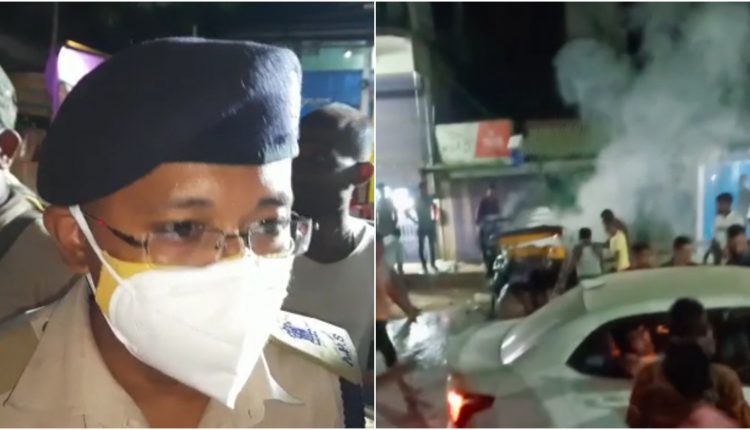 In 2012, a bus driver in Pune, Santosh Mane had hijacked a state transport bus and ran havoc in the city. In a rampage, he killed 10 people and injured more than 30. Eventually, he was overpowered by the Police and locals. Pune Session Court pronounced the death sentence for Santosh Mane but the accused went and appealed at a higher court.

Yesterday, a Santosh Mane type driver ran over one after another in Cachar’s Katigorah area. A truck bearing registration number NL 01 AA 8717 rampaged over a few members of Satarupa Durga Puja Committee in Katigorah Chowrangee. Three got severely injured and one of them identified as Nilendu Paul has been declared dead by doctors in SMCH.

From there the truck went on to hit a passenger-auto rickshaw near Katigorah Bazar. The impact was such that the Auto Rickshaw caught fire and the passengers inside were trapped. The locals had to rescue the passengers but by then, many of them incurred burnt wounds. They have been rushed to Silchar Medical College and Hospital. As per reports, there were five passengers in the auto-rickshaw and all are severely wounded.

The rampage continued. The unloaded truck kept on speeding and near Badarpur Ghat, it collided head-on with a Maruti Suzuki Alto. Due to the impact, the hatchback car fell 50ft into a ditch. Four individuals were driving in the Alto and all of them are critically wounded. Locals suspect that the truck must have run over many other pedestrians on the way.

After colliding with the Alto, the truck driver went and hit a parked dumper. There it damaged the vehicle. Eventually, after the joint operation of Panchgram and Badarpur Police, the truck was seized but the driver managed to escape. Police officials who nabbed the truck said that they have recovered bottles of alcohol from the truck.

Meanwhile, the agitated locals blocked the National Highway. Additional SP of Cachar, Partha Protim Das went to the spot and after rounds of negotiation, the blockade was removed at around 4:00 am. “They have their demands and we will look into them. We will also see what needs to be done to reduce the number of accidents on this road,” said Additional SP.

Around 10 individuals are reported to be in critical condition. One of them has been transferred to Guwahati and the doctors in SMCH fear that the death toll can rise further.