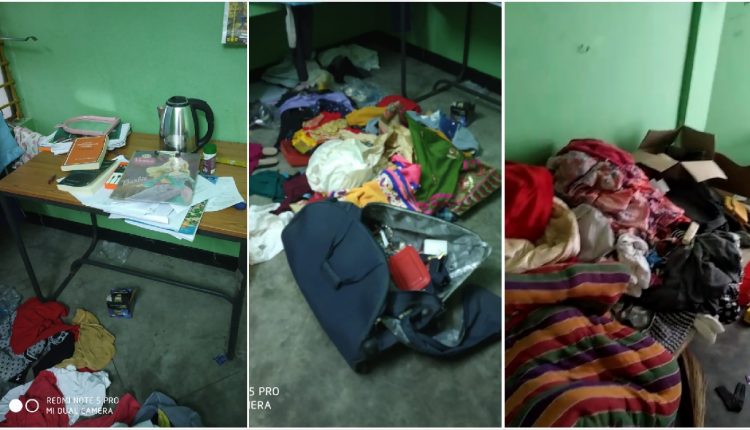 The hostels of Assam University Silchar was used as quarantine centres by the District Administration. In the early days of pandemic, the hostels were requisitioned by the administration to accommodate air passengers coming from various parts of the country.

Back then, the norm was that the inbound passengers can only travel to their respective homes after they have tested negative for COVID19 on RT-PCR test. The samples were collected at the time of arrival and the report took at least three days.

Today, the students of Assam University Silchar discovered that their rooms are in a mess and multiple items are missing. In one of the rooms, in the girls’ hostel, the wardrobe has been broke open and the students’ clothes were thrown all around. In another room, electronic appliances were spoilt and shoes were missing. Plenty of books are either torn or thrown away.

The locks have been broken to enter the rooms in the girls hostel. According to an estimate made by the students, stuff worth Rs 72,000 approximately are missing and the students are yet to open all the rooms.

After finding that their rooms are in such a horrible state, the students reached out to the Security and Vigilance Officer of Assam University Gautam Nandi Purkayastha. The general secretary of AUSU informs that the security officer has passed the ball on district administration’s court.

The District Development Commissioner, JR Lalsim who was in charge of requisition and mirgant management counters, “We never opened the hostels of students where belongings are kept. We requested university authorities to show us those hostels which are empty and unlocked. Those hostels were only requisitioned.”

In this passing the parcel, the students are at a loss. “The AUSU will fully extend its support to the students who have lost their belongings. Our demand is that the Assam University authority must compensate for the loss,” asserts general secretary of the Students’ Union, Aritra Dhar.

While it is true that the administration only requisitioned empty rooms, the individuals in quarantine may have possibly crossed over to other zones and broke the doors to enter the rooms. In that case, shouldn’t the security in charge be held responsible? “Nobody is willing to take the responsibility. University’s security in charge is saying Nodal officer was in charge and the nodal officer is denying it,” informs the GS.

It remains to be seen whether the administration would intervene to ensure that the students’ losses are recovered.