Racial profiling in Meghalaya goes viral, "It is a response to the interference," Khasi Students' Union

Banners reading “All Meghalaya Bengalis are Bangladeshis” have been put up by the Khasi Students’ Union in prime locations of the state. Another banner reads, “Bangladeshis Stop Your Atrocities in Assam, Meghalaya, Mizoram, and Tripura.”

General Secretary of Khasi Students’ Union, Donald Thabah confirmed that those posters were indeed published by the Students’ Union. He said, “Recently we have had too many groups interfering in an ongoing investigation of the murder of a youth. This was our time to speak up and that is why we have decided to protest.”

Explaining more about the interference, Donald Thabah said, “There are groups that tried to give it a racial, communal colour. They made baseless allegations that the Christian majority is persecuting the Hindu Bengalis in areas like Ichamati. Meghalaya Police gave multiple statements clarifying that there were no such issues. Yet, these groups were hellbound to spread the fake narrative.”

When asked about the details of these groups, the general secretary of the Khasi Students’ Union said, “Northeast Regional Indigenous Forum, Legal Rights Observatory and three youths from the Ichamati area.” Donald Thabah asserted, “The three youths submitted a memorandum to the governor of Meghalaya which said there is persecution of Bengali Hindus and especially women happening in the Ichamati area. The Police investigated and found no truth in it and yet they continue to spread fake narratives.” 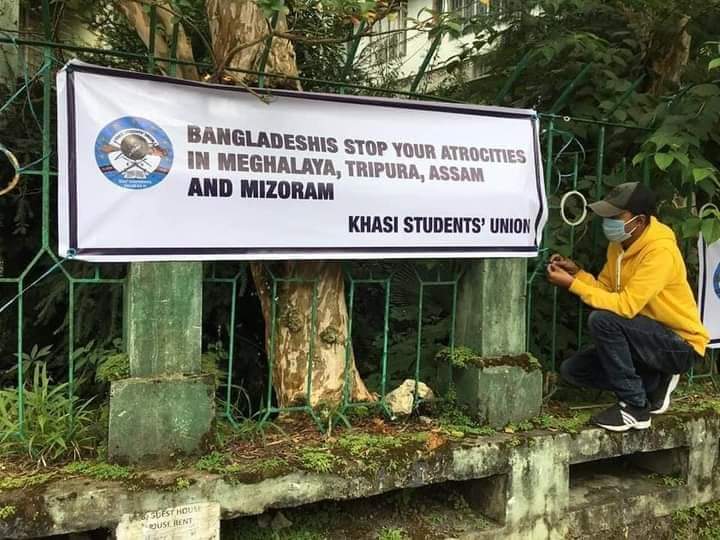 The question if the Khasi Students’ Union believes that all Bengalis living in Meghalaya are Bangladeshis, did not get a response from the general secretary of the Union.

Meanwhile, the Meghalaya Police published a clarification on its social media handles, “It is hereby informed that banners that were displayed today in public places have been removed. We request all concerned to kindly co-operate with us in promoting peace and harmony in the State.”