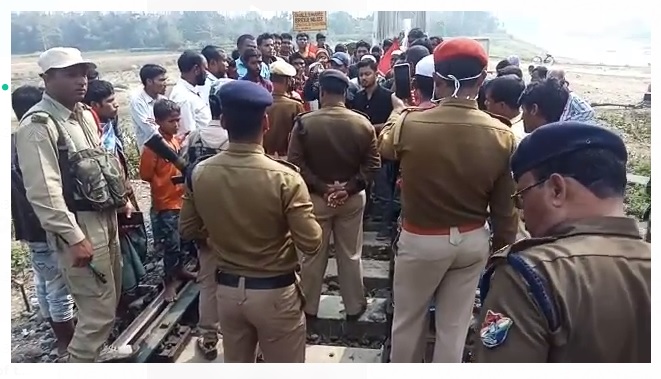 ‘Forum Against Mizoram Aggression’, a locally formed group has called for an indefinite rail blockade to Mizoram to forestall the movement of trains to the neighboring Mizoram state, until a stable solution is reached to the decade long border dispute between the two sister states.

Around 50 people from different organizations are camping over the railway tracks near Jamira Railway Bridge and have stalled the rail connectivity to Mizoram state.

“From 10 am onwards of 15th Feb, rail blocked is going on near Jamira railway station located near Dhaleshwari Bridge No. 133 on Silchar-Bhairabi railway route. The protest is going on under the banner of Forum Against Mizo Aggression for the demand of Rehabilitation of 21 families of Assam Mizoram border who are victim of Mizo miscreants” a message from the organizer reads.

Apart from the above, the protestors have also put forward demand of setting up an army camp at Kachurtal of the district, so as to protect the border residents from border tension.

From the railway department, Assistant security Commissioner RPF Badarpur and Jamira PP I/ C Lilagnshu Das on Tuesday visited the spot to convince the protestors, but was of no success. The protestors pushed back the officials with intense sloganeering against the Assam and Mizoram government.

“As of now there is no passenger train movement to the state and also no goods train is stranded due to this blockade” Hailakandi SP PK Nath said to the Barak Bulletin.

“We are trying to convince the protestors to withdraw the protest. As of now we are not of the view of using force but if situation demands we will use it” SP mentioned.