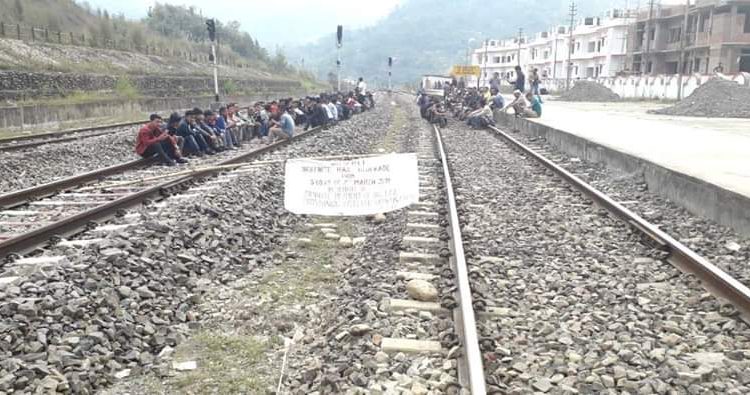 Rail blockade withdrawn, services to resume as per schedule from tomorrow

A major respite for the people of Barak Valley, Agartala and the entire region. The ongoing railway blockade in Dima Hasao district has be called off. The NC Hills Indigenous Students Forum and Indigenous Womens Forum in a joint statement announced that they have decided to withdraw their strike with effect from 1:30 PM today afternoon.

The joint statement read, “Having full trust and confidence upon the Government of Assam, the indefinite rail blockade called by the The NC Hills Indigenous Students Forum and Indigenous Womens Forum in demand of BG Conversion compensation for the the affected people from 5:00 AM of March 7, 2019 is hereby called off on March 9, 2019 at 1:30 PM after receiving invitation letter from the honourable chief minister Government of Assam for a final discussion to settle out long pending demand for the payment of Railway compensation. The joint meeting will be held on March 11 at 2 PM at Janta Bhawan Dispur Guwahati.

The statement added, “We hope and believe that with the intervention of honourable chief minister, government of Assam our long pending demand will be solved.”

A senior official in Silchar Railway station informed us that the railway services is expected to resume as per schedule from tomorrow onwards.