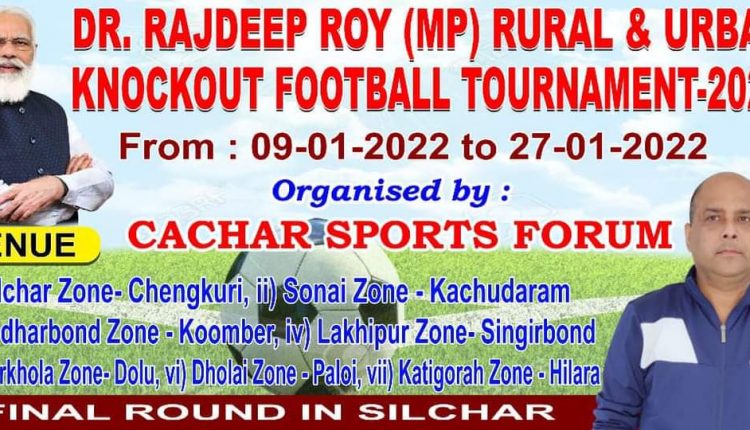 By barakbulletin On January 6, 2022 - 8:12 am
Share
Cachar Sports Forum going to host a Knockout Football tournament named after Silchar MP Dr. Rajdeep Roy. A press conference was held at the Cachar BJP office where it was announced that the Cachar Sports Forum which was formed as a probable alternative to District Sports Association Silchar will be hosting the knockout football tournament named after Silchar MP.
The football tournament is being organized, as Dr. Roy said, as per the wish of PM Modi which he conveyed to all the BJP MPs in the last parliamentary board meeting. PM Modi wants all the BJP MPs to get actively involved with any kinds of local sports and athletics at the local level of their constituency.

The matches will be played following the FIFA rules and will be for 70 minutes with half time at 35 minutes. One champion team will be selected from each zone, and the final tournament will be played between eight teams at the Football Academy field in Silchar. The tournament will begin on January 9 at Sonai. There will be a man of the match award in every match, winner of the tournament will get Rs 25,000 as winning money and runners up will get Rs 15,000 there will be trophies for other awards. The organizers have instructed the teams not to hire players from outside and give chances to local players. Total 42 teams will be playing at the zonal rounds and the Final match will be held on January 27.