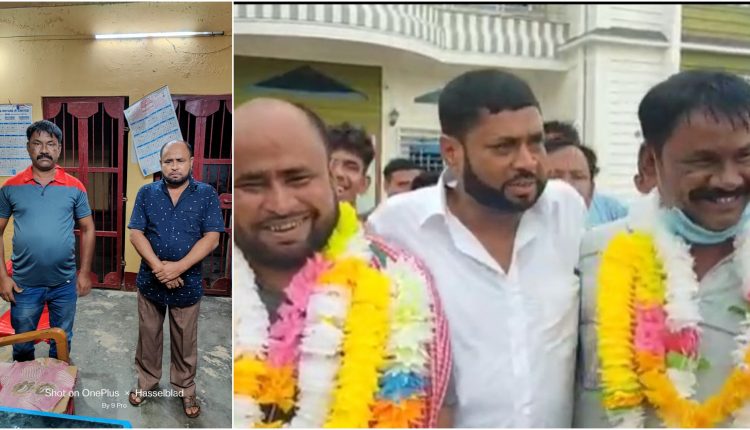 Released after local MLA’s pressure, Hailakandi Police detains the two individuals within hours. Like the entire state, Hailakandi Police also conducted a drive to detain individuals allegedly involved in land brokerage at government offices. These brokers take commissions from common citizens when they go to the Settlement office for registration or permission to sell a plot of land. They also issue permissions to miscreants without the consent of the actual owners which results in land-scam worth crores. The drive has been rolled out under the direct instructions of chief minister of Assam, Himanta Biswa Sarma.

As Hailakandi Police started detaining and subsequently arresting individuals, a group of locals resorted to protests and demonstrations. The chief minister’s instruction was clear, “no one should be spared” irrespective of their political affiliations. Sarif Uddin Barbhuiya and Anwar Uddin Laskar, both active in local politics and are known to be Algapur MLA Nizam Uddin Choudhury’s “close ones” were also arrested by Hailakandi Police. Moments later, the MLA himself visited the Police station with a gathering and pressured the local police to release the duo.

Speaking with the media, Algapur MLA Nizam Uddin Choudhury said, “The detention of Sharif and Anwar was on baseless grounds. The Police was handed over a list by someone with vested interest and they just acted as per the list without any verification. One of the two is a Panchayat member and the other one does not have any literacy, how can they be land brokers. I asked the local Police to show me one piece of evidence which substantiates the claim that they are involved in the nexus of land dalali. The police could not furnish any and so they were released.”

Astonishingly, the MLA held a procession to take the duo back to their native place from the jail. Garlands were offered to all three of them by the followers. Such visuals coming out from Hailakandi attracted criticism throughout the state. If sources are to be believed then the chief minister himself was briefed about the circumstances under which the duo were released. Reportedly, Himanta Biswa Sarma then spoke with SP Hailakandi Gaurav Upadhyay and another operation to arrest both of them was rolled out. At 12:52 am, Hailakandi Police confirmed that under the leadership of SP Gaurav Upadhyay, both were arrested again.

All India United Democratic Front (AIUDF) is yet to release a statement on MLA Nizam Uddin Choudhury’s conduct. He obstructed the Police on duty and then celebrated the same publically. Not only that, but he also asked the officer in uniform to furnish evidence and substantiate the detention. What also remains to be seen is if the government takes suo moto cognizance of MLA’s conduct and brings him under investigation.