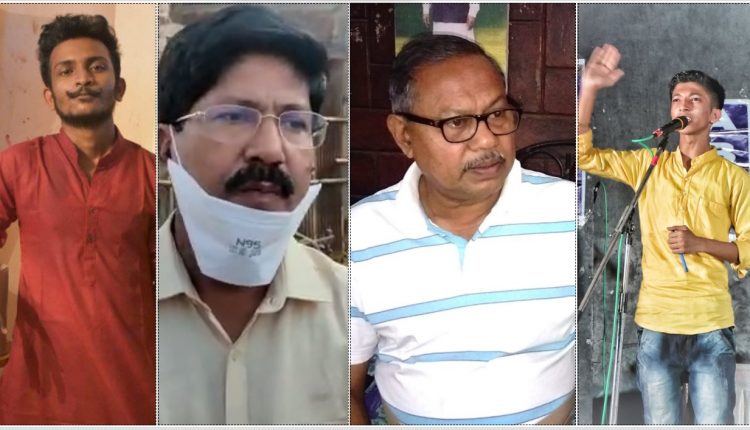 A place dedicated for Uddiyaman Durga Puja Committee to organise Durga Puja annually or a Moinul Haque Choudhury Smriti Mukto Mancha or both. Every mouth that has a tongue has an opinion about the controversy that deputy speaker and Sonai MLA, Aminul Haque Laskar defines as a “political gimmick”. But who is trying to score brownie points and from whom?

In the Sonai Bazar area, Uddiyaman Durga Puja Committee organises Durga Puja Committee every year. In the same spot, a concrete stage was built last year and the Puja Committee used that during the Puja celebration. But recently, the stage has been inaugurated as Moinul Haque Choudhury Smriti Mukto Mancha and that has offended many individuals living all across Barak Valley.

However, MLA Aminul Haque Laskar is of the opinion that both Hindus and Muslims of the locality are happy with the decision to name this stage after the first Sonai MLA. In a detailed interaction with Barakbulletin, he said that there are plenty of government institutions like the stadium, Civil Hospital which are named after individuals with zero contribution to the growth of Barak Valley.

“Moinul Haque Choudhury is the first MLA from Sonai constituency, while he was the Minister in Assam Government he had revolutionised agriculture in Sonai and in fact, the entire Barak Valley. After that, he went to Dhubri and became an MP and a Minister in the Central Government but his love for his birthplace got him working for the Valley. Sugar Mill in Cachar, Paper Mill in Cachar, Textile Mill, Engineering College, Medical College, Silchar Radio Station are all his contributions. If a small stage is dedicated to a man like him on request of the people of this locality, it cannot be seen as a crime,” said Laskar.

After his interview was published on Barakbulletin, counter-arguments were raised. Two primary questions that got highlighted most often are- why is it being done at a place where Durga Puja is being organised annually for more than 50 years and why is Aminul Haque Laskar glorifying a leader who was once associated with the Muslim League which played a pivotal role in the partition of the country? 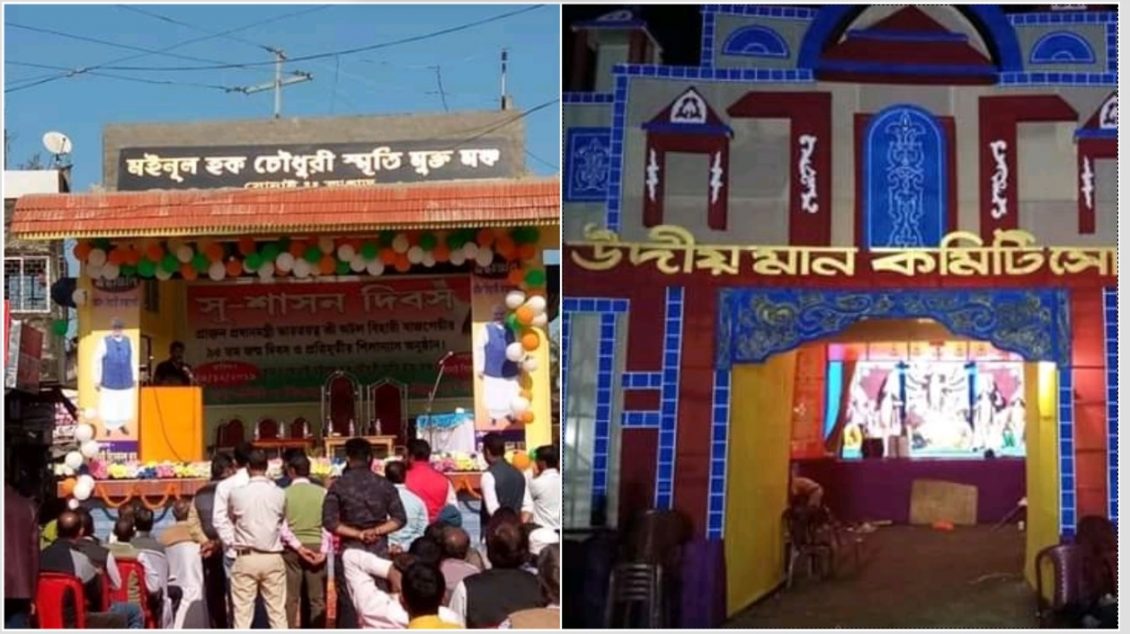 Laskar made it clear that all these questioning is an attempt to score some easy political points. “The entire population of the Sonai area irrespective of religion support this stage being named after Moinul Haque Choudhury. All this ‘hulla-gulla’ is nothing but a political gimmick and people trying to gain some brownie points,” said Laskar.

Adding, “Not a single person from Sonai or Udiyaman Durga Puja Committee raised an objection instead people sitting in Durgapally are writing about it. What is his relationship with the Durga Puja in Sonai while he himself is in Durgapalli?” Laskar questions the base of this opposition.”

Well, it is not just one person sitting in Durgapally writing about it, there are plenty of them and from very much every part of the valley.

Barakbulletin reached out for a few reactions on the controversy and here are the edited excerpts:

We are in the middle of a different kind of war at this moment and it will be better if we devote all our energy to fight the invisible enemy which has caused a global pandemic. We will get enough time for political discourse on this matter and other issues. However, I would like to state that, Moinul Haque Choudhury was not that great a man that we must glorify him to this extent, (Moinul Haque Choudhury gaacho uthaiya rakha’r moto amon kicchu nai). I am not wholly aware of the controversy and as I said, we have other priorities at the moment.

Recently from a social media post, I got the information that a Community Hall, which was built where ‘Udiyaman Durga Puja Committee’ of Sonai Bazar under Sonai constituency is offering Durga puja from last 50 years- is named as ‘Mainul Haque Choudhary Smriti Mukta Mancha’. It was named after Lt. Congress MLA of Sonai constituency who was also a leader of Muslim League whose strong advocacy for the establishment of a separate Muslim-majority nation-state, Pakistan, led to the partition of India in 1947 by the British Empire. Dedicating a community hall where Hindu People are doing Durga Puja from years- to a Muslim leader who was also a part of a political party whose ideology was to divide India in name of religion is nothing but a conspiracy that hurts the sentiment of the majority. Whether this entire thing was done with the consent of the Puja committee or if they were being pressurized is what remains as a question. It is also seen that after naming it as the aforementioned stage/community hall, some people also organized ‘Owak Mehfil’ at the place where Hindu people use to do Durga Puja. We all demand that this community hall should be renamed and the ownership should be transferred to the Puja committee.

With all due respect to the hard-working, Minister in Indira Gandhi Govt, Late Mainul Haque Choudhury, I would like to state that religious festivals and Political figures must never be intermixed. Naming a stage, destined for public celebrations, where religious festivals like Sharodiyo Durga Puja is held, as ‘Mainul Haque Choudhury Smriti Mukto Mancha’ is an act that I don’t take in a good taste. Uddiyoman Puja committee, which is organising Durga Puja for more than 50 years now, is one of the biggest puja committees of Sonai, and hence this is an issue of high importance. A multipurpose stage, if built for public use, could have been named as ‘Janata Manch’ or ‘Sharbojonin Mukto Mancha’ … Naming a public stage, which is not owned by any particular political party on the name of a political figure, who also had affiliations to the Muslim league before 1951 is disheartening. I would request the Respected MP, Respected MLA of Sonai and DC Cachar to discuss the matter in detail and bring an end to this controversy in our Peace Land Barak. Moinul Haque Choudhury’s work could be praised by naming any other institution after him or anything of public cause, that doesn’t contain religious observations.

From Bangladesh to India; the story of a sacred Kali Puja