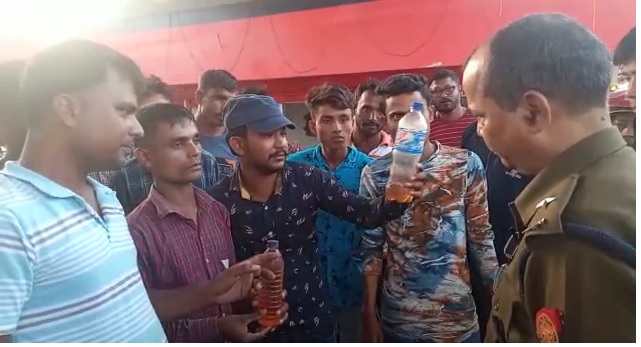 Consumers are already facing the burns of fuel price, the price of petrol and diesel is at an all-time high, but the controversies around the alleged malpractices at petrol pumps do not seem to be ending. Trouble broke out today at Udarbond Petrol Pump. One consumer alleged that the petrol pump operator had given fewer quantities of petrol with the paid the price. A few more consumers were gathered immediately at the pump premise and started protesting, arguing with the petrol pump authority. Local Police had to rush to the petrol pump to get things under control.

Azizur Laskar went to the Udarbond petrol pump to get petrol of Rupees 110 in a container bottle. The operator gave him the petrol of Rupees 110 in a 750 ml Cold drink bottle. Azizur was a bit sceptical, seeing that the amount of petrol is being put in a 750 ml container, whereas the rate of 1-litre petrol is around 95 Rupees today. Azizur took that petrol, checked it himself, and found that the quantity of petrol was just 600 ml. Within a few moments, a crowd gathered there and started creating a stir in the pump. Local Police rushed to the spot to keep things under control, and they tested again with the petrol vending machine.

“In past PCO owners used to do malpractice with the meter and charge of a phone call, all the machines and computers can be manipulated, only a proper investigation can bring out the truth,” said a consumer present at that moment. 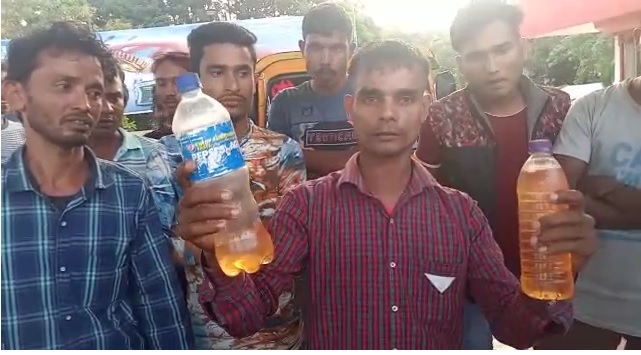 OC of Udarbond Police Station told Barak Bulletin that no written complaint or FIR was registered against the Petrol pump. The Police refused to take suo-moto cognizance of the matter, so no further investigation will be conducted to know the veracity of the allegation of malpractice at Udarbond Petrol Pump.

What is also worth noting is that the Petrol Pump did provide fuel in a plastic can which has been banned by Cachar district administration.