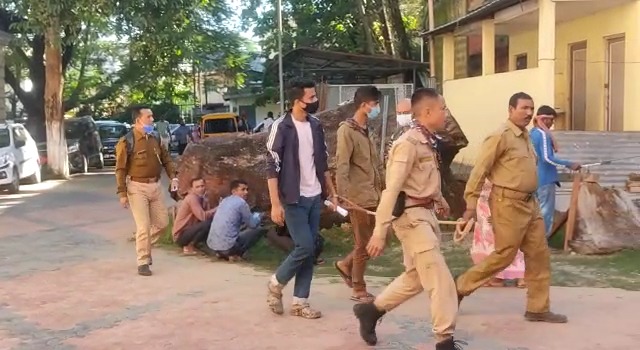 From pressing charges of kidnapping, organ trafficking and murder to taking their daughter back home, the case of Raj Mazumdar and Saheeba Mazumdar has come a long way through twists and turns. 19-year-old Saheeba Mazumdar, daughter of high profile businessman Mansur Alom Mazumdar studies at a private university in Pune. In October, according to Mansur Alom’s allegations, she went missing. He then went to Pune and lodged an FIR at Paud Police Station. He alleged that Raj Mazumdar – the owner of Raj Driving School kidnapped his daughter. He met Cachar SP Ramandeep Kaur and said that he fears his daughter is dead.

Cachar SP established contact with her counterparts in Pune and started raiding places in search of the couple. On one side when Mansur Alom Mazumdar was lodging complaints and pressing many charges, his daughter, on the other side, kept publishing videos stating she is fine and has married Raj Mazumdar. Mansur Alom rubbished those videos claiming them to be either fabricated or published under pressure.

On November 16, based on the information it had at its disposal, Cachar Police conducted a raid in Khliehriat – the headquarters of the East Jaintia Hills district in Meghalaya. From there, Raj Mazumdar, his brother and Saheeba Mazumdar were detained and brought to Cachar. Today, Saheeba Mazumdar was produced at the court. While the minutes of the court proceedings remain unknown, Saheeba Mazumdar was seen walking home with her father Mansur Alom Mazumdar.

Family sources informed that Saheeba Mazumdar’s parents met her yesterday when they broke into tears. Following this, she agreed to walk home with them provided they ensure no harm to Raj Mazumdar. Sources revealed that today, she maintained that she eloped with Raj Mazumdar consensually and has no allegations against him. However, at this stage of her life, she would like to go home with her father.

Family members of Saheeba Mazumdar refused to speak however, sources close to them informed that they said the Police allowed Saheeba Mazumdar to walk home with Mansur Alom Mazumdar on condition that she will cooperate in the investigation and not leave the station.

Meanwhile, Raj Mazumdar’s family is yet to secure bail and so, he will remain in jail. Sources also informed that Mansur Alom Mazumdar will withdraw all the charges pressed on Raj Mazumdar and two families have already extended hands towards a cordial relationship.